Cougariffic – Adult Time’s top lesbian studio Girlsway is offering fans a roaring good time with the release of brand-new mini-series Cougariffic, with the first episode debuting December 12 at Girlsway.com and on the AdultTime.com platform.
.
Adult Time’s Chief Creative Officer Bree Mills said that the series “has a little something for everyone… we’ve got a Model Debut from Jeni Angel, it’s Gianna Gem’s second Girlsway scene and every Cougariffic episode has MILFs galore!” 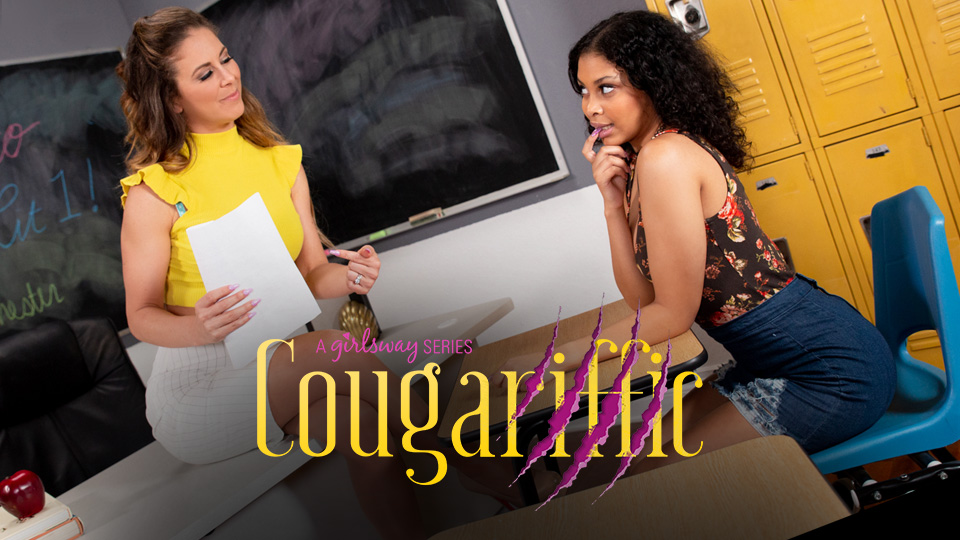 .
‘Wrong Homework’ kicks off with smitten student Jeni Angel – who’s hot for teacher Cherie DeVille – accidentally turning in sexy erotica instead of her book report. “You’re an incredible writer… although the subject matter is completely inappropriate!” says Cherie as she leans in for a kiss. Directed by Eli Cross and Casey Calvert, the scene is a Member Fantasy inspired by Adult Time subscriber Neptune.
.
“I loved getting to pop Jeni’s Girlsway cherry!” said DeVille of Angel’s Model Debut. “She is a total babe and this cougar didn’t hold back teaching her a thing or two.”
.
Calvert added, “I always know the scene is going to be spectacular when I have Cherie on set. And Jeni was the perfect kitten to her cougar. This is such a hot Cougariffic scene!”
.
In ‘The Recluse’ (Dec 19), Gianna Gem is intrigued by the gorgeous -and very mysterious – neighbor (McKenzie Lee) that everyone’s talking about, and decides to get to the bottom of this beautiful enigma. Directed by Craven Moorehead, the Member Fantasy scene was inspired by ParadiseLost.
.
‘The Edge of Her Seat’ (Dec 26) puts Dana DeArmond and India Summer at odds with their new roommate – and chronic masturbator – Eliza Ibarra. The girl can’t help it, and she can’t get relief! But Dana and India can: “It’s curable… we can help you!” Billy Visual directed the Member Fantasy inspired by NotoriousVIC.
.
“I am just happy I am finally being accepted into the MILF/cougar community!” said DeArmond, “and lucky enough to be alongside a legend like India with such an adorable kitten like Eliza.”
.
“When booking a threesome of ladies, and you have seasoned veterans like Dana DeArmond and India Summer as the first two pairings, you need a strong third performer to be able to keep the energy alive in a scene,” said Visual. “Look no further than Eliza Ibarra! She a firecracker and made this threesome explode with orgasms all around. What a pleasure it was shooting this trio!”
.
Cougarific is available at Girlsway.com and the dedicated channel on the Adult Time platform at AdultTime.com, home to the most extensive catalog of award-winning content – with access to over 200 channels and 60,000 episodes in one subscription!
.
About Girlsway:
Launched in October 2014, GIRLSWAY is the largest lesbian erotica studio in adult, now including over 45 lesbian films and series and 7600+ episodes available on the Adult Time platform.  Created by award-winning filmmaker Bree Mills, Girlsway produces original and addictive narrative content that mixes passionate lesbian sex with compelling characters and inter-connected storylines.
.
About Adult Time:
Launched in 2018, Adult Time is a streaming service exclusively for adults.  Created by award-winning filmmaker Bree Mills, who also serves as Chief Creative Officer, Adult Time is a platform built by fans who believe in a future where mature audiences can safely, securely, and proudly have a place in their lineup for premium adult content.
.
Dubbed the ‘Netflix of Porn’ by mainstream media outlets, Adult Time offers an extensive catalog of over 200 channels, 60,000 episodes and 5+ new releases per day from some of the most recognized studios, including Girlsway, Pure Taboo, Burning Angel, Fantasy Massage, 21 Sextury, and Vivid Entertainment, alongside exclusive original series, feature films, and much more.
.
For more information, please visit:
http://www.girlsway.com
http://www.adulttime.com
Follow on Twitter & Instagram:
@girlswaynetwork
@adulttimecom
@thebreemills