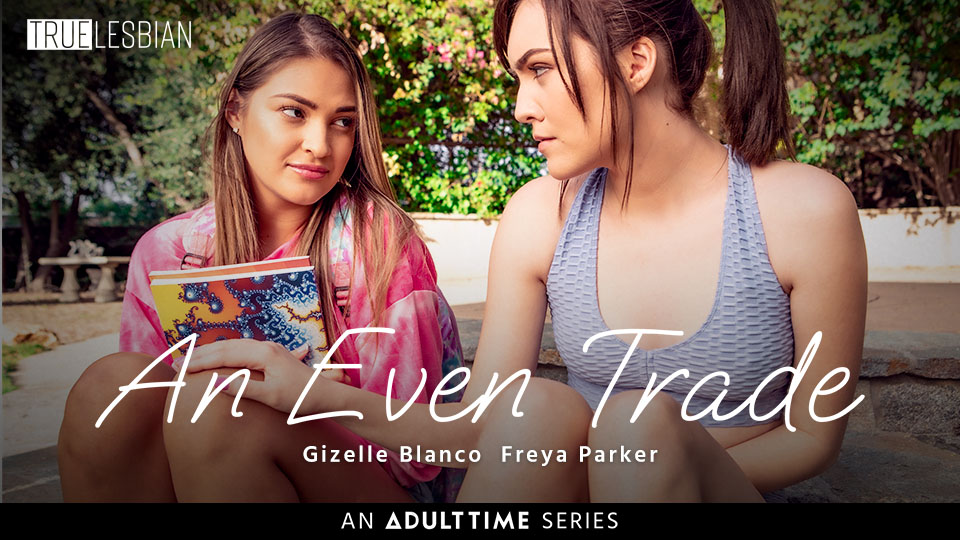 (Montreal, QC / August 1, 2022) — Adult Time proudly presents the latest release from their award-winning True Lesbian Series, “An Even Trade.” Produced by Bree Mills and featuring the directorial debut of Stella Smut, this true-to-life drama depicts a star-crossed encounter that forever changes the course of two lives when they least expect it.
.
Freya Parker stars as Mona, a popular college athlete who scores the deal of a lifetime when she offers to protect nerdy loner Sophie (Gizelle Blanco) from on-campus bullies in exchange for tutoring. A spark ignites, and as Mona guides Sophie to the discovery of her true sexuality, the eternal question remains… Can these women from two different worlds find true love?
.
“True Lesbian is one of my all-time favorite series, because we can offer realism and authenticity in our portrayals of lesbian relationships, while still providing great entertainment for traditional fans of the genre.”  said Bree Mills, who created the series in 2019 and also serves as Chief Creative Officer for Adult Time.  “This season, I wanted to expand the project to feature the directorial talents of other queer filmmakers.  In her debut, Stella Smut brings both a beautiful aesthetic and sensual sensibility to her work that I feel will resonate very well with our audience.  I look forward to seeing everyone’s reactions, along with the other exciting plans we’ve got for the series in the months ahead!”
.
“I think this series is more raw and realistic than typical lesbian porn,” added Director Stella Smut. “I try to emphasize feeling and connectivity between the performers, and bring real stories to life. Our cast and crew for this project was great and, together, they really helped me elevate the work to something cinematic!”
.
True Lesbian is available at TrueLesbian.com and the Adult Time platform at AdultTime.com, home to the most extensive catalog of award-winning content – with access to more than 320 channels, 60,000 scenes and 8 new releases per day – all in one subscription.
.
About Adult Time:
Launched in 2018, Adult Time is a streaming service exclusively for adults.  Created by award-winning filmmaker Bree Mills, who also serves as Chief Creative Officer, Adult Time is a platform built by fans that believe in a future where mature audiences can safely, securely, and proudly have a place in their lineup for premium adult content.
.
Dubbed the ‘Netflix of Porn’ by mainstream media outlets, Adult Time offers an extensive catalog of more than 320 channels, 60,000 episodes and 8 new releases per day from some of the most recognized studios, including Girlsway, Pure Taboo, Burning Angel, Fantasy Massage, 21 Sextury and Vivid Entertainment alongside exclusive original series, feature films and much more.
.
For more information, please visit:
http://www.adulttime.com
Follow on Twitter & Instagram:
@adulttimecom
@thebreemills

Time for Taboo? Saddle Up, Get Comfy & Come Along for the Ride with TeamSkeet 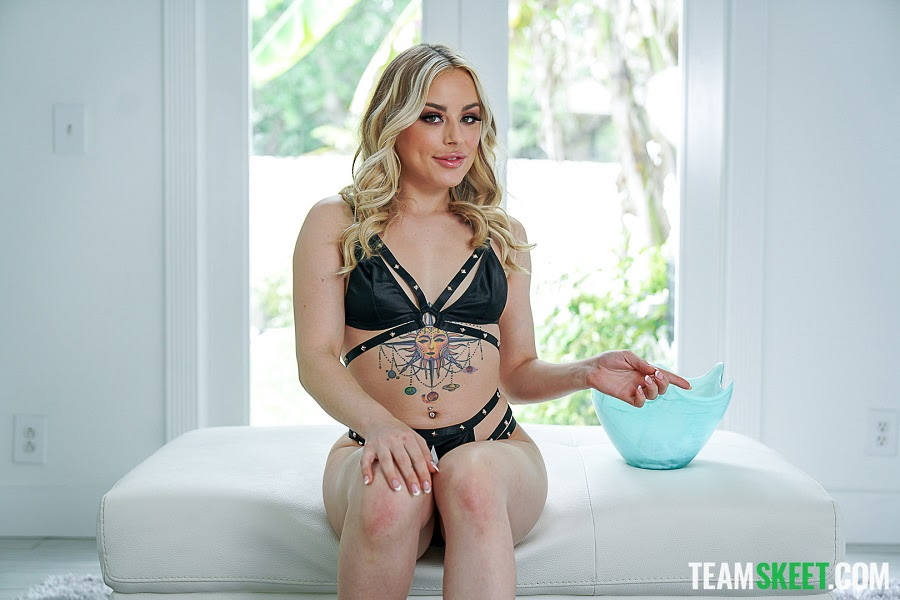 (Los Angeles, CA / June 17, 2022) — Taboo titles may be all the rage, but TeamSkeet takes the cake: from Grandpas and Sis Swaps to Perv Moms, Dad Crushes and Anna Claire Clouds’ All-Star showcase, there’s more to love at TeamSkeet.com.
.
Not My Grandpa! spends quality time with family as Chanel Camryn – who made her adult film debut in TeamSkeet’s She’s New series last month, settles into country life, household chores and sexy costume try-ons for step-grandad Donnie Rock in “Rise to the Occasion” (June 13).
.
From Hijab Hookup, Willow Ryder is proud of her culture but her friend Nicky Rebel doesn’t understand many aspects of it – especially that whole ‘no sex before marriage’ thing. Luckily their friendship is strong, they don’t agree on everything and they are “Learning Together” when it comes to understanding each other better (June 13).
.
Dad Crush – when Lilith Grace takes her stepdad’s (Filthy Rich) car without his permission, she knows the punishment would be swift and severe if she got caught. Oops… “I’m Sorry, Please Spank Me!” premieres June 14.
.
TeamSkeet All-Stars presents Anna Claire Clouds as June’s standout All-Star of the Month in a sizzling showdown with co-star Brick Danger “A Fantasy Come True’ (June 14).
.
Family Strokes offers up an unexpected reunion when Anissa Kate’s soon-to-be stepson Anthony Pierce comes over to meet his new stepsister Samantha Lexi – his old Junior High girlfriend! – in “More Mature” (June 16).
.
From Sis Loves Me, Bess Breast needs a little help with her dire fiscal situation, and her financial whiz stepbrother Peter Green knows just what to do to get the money rolling in – but it’s going to cost her! – in “CryptoBro” (June 17).
.
FreeUse Fantasy spotlights the fun times and sexy moments between Britt Blair and Rion King – which happen quite often, as Rion can’t seem to keep his hands off of her – in “Rion’s New Girlfriend” (June 18).
.
Perv Therapy digs deep into the heart of the real issues when Aria Valencia consults with her new therapist (Justin Magnum) about her “Uncontrollable Urges” when it comes to masturbation. Lucky for her, Dr. Magnum knows just the treatment! (June 18).
.
Sis Swap brings Coco Lovelock and Haley Spades together for some quality time together in “Playing Doctor” (June 19).
.
The TeamSkeet Network boasts an extensive erotic collection of more than 85 network series and 65 premium series, featuring 8,400+ scenes that highlight the talents of more than 3,200 performers ranging from amateurs to superstars, for as low as 26 cents a day with a 12-month membership.
.
Visit TeamSkeet.com and follow on Twitter @teamskeet and Instagram @teamskeetsociety.

This article originally appeared in YNOT.com 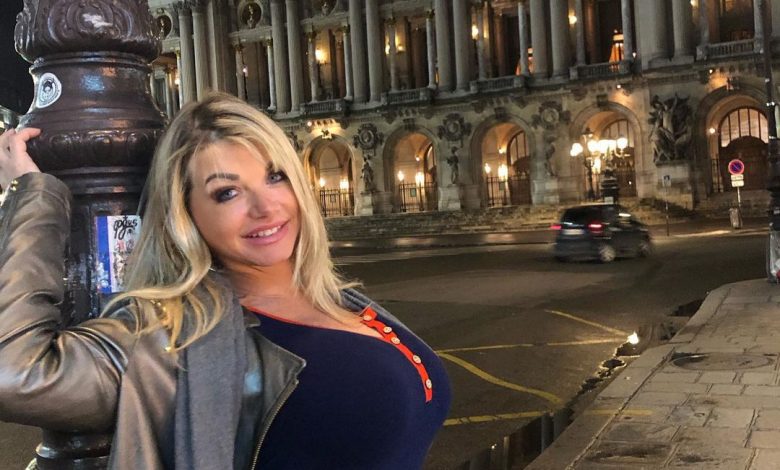 At the outset of her career, Vicky says she ran into ageism.

“When I started videos at 38, a few people said I was too old,” she recalls. “Most were retiring at that age, not just starting! I remember one of my first agents, Derek, trying to set up photoshoots and photographers refusing me just because of my age. He would say, ‘would you just look at her first, before saying no?’ They said, ‘flat out no, I am not shooting any 38 year-olds!’ But then the MILF craze took over and I shot for Naughty America, and it’s been onwards and upwards since then. It’s amazing to see how the business has evolved from 2003 until today. It’s mind bending.”

Success Has Its Price

“Not everyone approves of adult, as you learn quite quickly,” says Vicky. “In my case, I had family disown me for 14 years and some still don’t speak to me.”

Then there’s the issue of retirement: “20 years is a long time in any profession — especially one where they don’t give you a gold watch or golden parachute payoff when you retire,” she says. “There is no 401K. You have to look out for yourself. Still, I thought it was going to be fun, it was fun and I’m still having fun! Over the years I’ve seen a lot of the world and learned a lot of things. I’m not complaining a bit!”

Not Afraid of Hard Work

Looks and brains are two reasons for Vicky Vette’s long-running success. The third reason is perseverance: She is a self-motivated entrepreneur who thrives on hard work.

“It’s quite amazing that the ‘Vicky Quickie’ has been on the market since 2009 and is still one of Doc Johnson’s top sellers,” Vicky notes. “I autograph and sell them myself on VickyVetteVideos.com I heard a rumor they want to do a butt plug for me and I hope that’s true!”

Vicky has seen the adult industry chance a lot since 2002.

As happens in real life, things did not always go the way industry experts predicted.

“I’ve seen a lot of trends that the industry wants to blow up — such as VR – simply not evolve that way,” she says. “Fans are more than ever only using phones. A lot of my fans don’t even own a laptop.”

These days, Vicky says she’s “wondering what is going to be the next platform to compete with or replace Onlyfans?”

“Loyalfans has a great platform with built in private camming per minute that works on all devices,” Vicky says. “It’s really glitch-free and impressive! Hit me up if you want to know more about it.”

The Secret of Her Youth

Two decades into her career, Vicky Vette still looks amazingly hot. So how does she do it? What’s the secret of her youth?

“Do you want my doctor’s number?” Vicky laughs. “Like a lot of girls, a few touch ups: Botox is my friend! That and very healthy living and good Viking genes. I don’t drink or do drugs – I got it all out of my system by the time I was 20 — and I try to stay fit. Having three rescue dogs that need exercise makes it easy too!”

“I am not sure,” she says. “I do know I’ll stay active in adult for a long, long time. I can never give it up, it’s my life, although. probably just more on the management side of things. How long are people going to want to see me naked?”

Getting serious, she adds, “this business has been good to me, and I would like to give back to people who have not been as lucky; get more involved in my community with a dog rescues or homeless shelters/soup kitchens, or battered women shelters.”

“The most important thing is to have a good support network around you,” she says. “No one – or very few — can do it alone. The social stigma is so hard to stomach. The hurtful comments on certain sites calling us old, ugly, fat, or young and stupid, ‘oh, your father must be so proud of you’, et cetera, are hard to read. Yes, you get a thick skin over time, but we are still human beings.”

“My advice to new girls is to get into a good circle with people who love you, inside or outside the industry,” Vicky adds. “People you can discuss options and ideas with. People who want the best for you who have no other hidden agenda. It is easy to get into this industry but much harder to be successful and happy. Surrounding yourself with good people is key. I’ve managed to keep my sanity and happiness.”