Vox, who makes her Elegant Angel debut with the title, commented, “I had a great time working with everyone at Elegant Angel. I want to thank them for making my debut scene one to remember.”

Elegant Angel’s official membership website, ElegantAngel.com, offers a catalog of well over 1,000 movies, including everything from classic content to exclusive access to new scenes and BTS before they are released on DVD. Members can watch online through a Roku streaming device, and enjoy a 10 percent discount on all sex toys and DVDs purchased through the official online store.

Written and Directed by Joanna Angel, Kisses’ autobiographical ‘Coming of Identity’ story shines a light on the unique experience of transitioning and highlights the importance of sharing real stories as a first step towards overcoming prevailing social stigmas.
.
Casey: A True Story stars Dante Colle as a small town drifter named Cameron who joins a local biker club and meets a woman (Khloe Kay) with a secret – one so powerful that it starts the wheels in motion towards changing the course of Cameron’s life forever… a life lived boldly as a woman named Casey.
.
“Working on Casey: A True Story was one of the biggest accomplishments of my career; it was such an honor to perform alongside such amazing actors and actresses such as Tommy Pistol, Dante Colle and Kira Noir,” said Kisses.
.
“The end of the movie is probably my favorite part because I’m still living in the success today and am so grateful for everything the industry has provided me. HUGE thank you to everyone at Adult Time, Bree Mills, and Joanna Angel for helping my story get told and hopefully inspire others to live the life they love.”
.
Kisses is also set to host a special Adult Time promo event on the company’s Instagram Live (@adulttimecom) for fans starting at 3:00pm (PDT) to promote the trans superstar’s highly-anticipated onscreen memoir.
.
“Casey’s journey is a compelling and important one that we were excited to tell,” added Adult Time Chief Creative Officer Bree Mills, who also serves as Executive Producer on the project.
.
On September 7, Adult Time will screen a special R-rated version and BTS featurette of the film for FREE at CaseyFilm.com. On the same day, AdultTime.com will launch Episode One of Casey: A True Story as part of a four-part series. Adult Empire will drop an exclusive VOD release from September 28 – October 4 and the feature film will see a full DVD release October 5.
.
To learn more about Casey: A True Story, go to the film’s official IMDB page and visit  AdultTime.com, home to the most extensive catalog of award-winning content – with access to more than 300 channels, 57,000 episodes and 8 new releases daily.
.
About Adult Time:
Launched in 2018, Adult Time is a streaming service exclusively for adults.  Created by award-winning filmmaker Bree Mills, who also serves as Chief Creative Officer, Adult Time is a platform built by fans who believe in a future where mature audiences can safely, securely, and proudly have a place in their lineup for premium adult content.
.
Dubbed the ‘Netflix of Porn’ by mainstream media outlets, Adult Time offers an extensive catalog of more than 300 channels, 57,000 episodes and 8 new releases per day from some of the most recognized studios, including Girlsway, Pure Taboo, Burning Angel, Fantasy Massage, 21 Sextury and Vivid Entertainment, alongside exclusive original series, feature films, and much more.
.
For more information, please visit:
http://www.adulttime.com
.
Follow on Twitter & Instagram:
@adulttimecom
@thebreemills

Mr. Skin, the world’s first and foremost authority on celebrity nudity, decided it was high time to crunch the numbers of the top five countries’ total number of sexy scenes and find out who is REALLY on top.
.
With the help of a fancy infographic, ‘Celebrity Nudity: Hollywood vs. the World’ ranks the United States, France, Germany, Italy and the United Kingdom in their charts stats; the winners are:
. 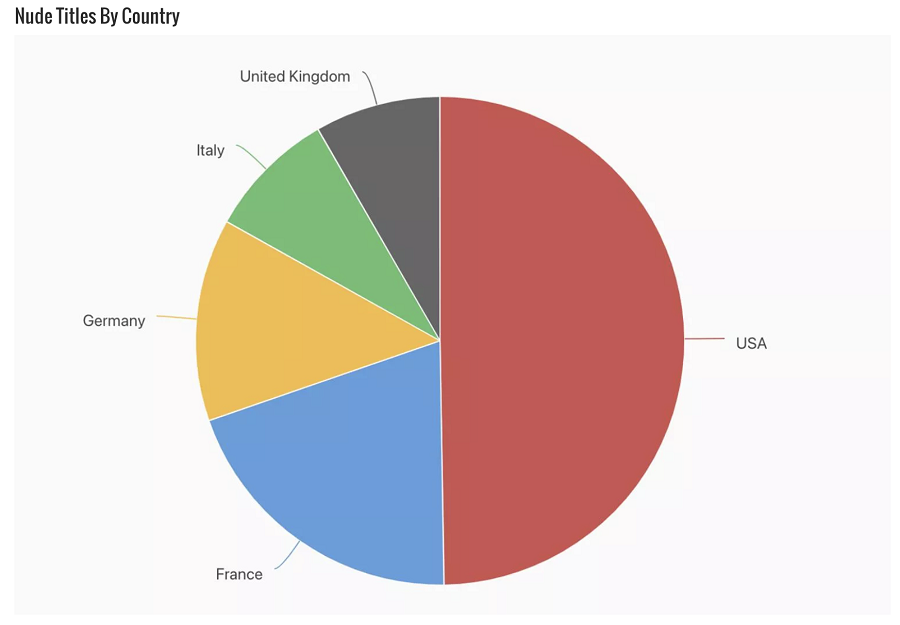 “Hollywood has accounted for over 28,000 nude scenes in film, compared with France’s 7,681; Germany’s 5,336; Italy’s 5,105; and the UK’s 3,439. That means Hollywood accounts for over 60% of the total nude scenes represented by these five countries.
.
“If you narrow the criteria slightly and just look at the number of titles with nudity – not every scene within those titles – things balance out a bit, with Hollywood racking up 9,721 titles with nudity. If you combine France’s 3,900 titles, Germany’s 2,623 titles, Italy’s 1,671 titles, and the UK’s 1626 titles, the rest of the world ends up with 99 more titles with nudity than Hollywood.”

Nude Celebrities by Country of Birth:

“What about the number of celebrities who’ve gone nude? Things don’t balance quite as well in the world’s favor in that regard, tipping heavily toward Hollywood. The United States is home to 7,322 celebrities who have gone nude on film, compared with 1,766 French celebs, 1,287 German celebs, 852 UK celebs, and 554 Italian celebs, giving Hollywood one tremendous slice of the pie!”

“A-list celebs account for the least amount of nude scenes regardless of country. In fact, Germany hasn’t got a single A-lister that’s gone nude on film and the other three countries are in the single digits. B-list celebs are around 10 times more likely to go nude on film with Hollywood leading the way with 1,627 B-listers who’ve gone nude. France comes in second there with only 90.
“It’s the C-list celebs who do the heavy lifting here, no matter which country you’re looking at, with the numbers exploding once you get into C-list territory. 5,531 Hollywood C-listers have doffed their duds on film along with 1,669 French C-listers, 1,243 German C-listers, 797 UK C-listers, and 497 Italian C-listers.”
.

“Hollywood loves breasts, butts, and bushes in that order, and there’s no denying that the rest of the world has got identical breakdowns. The disparity between boobs and everything else is substantial no matter where in the world you are, but Europe has got a lot more parity between butts and bushes than America does, that’s for sure.
.
“Hollywood’s boob count is 14,368, compared with 3,906 in France, 3,336 in Italy, 2,590 in Germany and 1,968 in the UK. Hollywood’s butt counter lands at 5,008, more than France’s 1,562, Italy’s 1,435, Germany’s 994, and the UK’s 687. Bare bushes have been featured in Hollywood films 3,334 times, versus 1,312 in France, 1,172 in Italy, 742 in Germany, and 468 in the UK.
.
“Again, the Europeans have really closed the gap between butts and bushes, especially in Italy and France where the butts lead by only a little over 200.”
.

USA – Scarlett Johansson; France – Eva Green; Germany – Diane Kruger; UK – Kate Winslett and Italy – Monica Bellucci.
.
All tallied, the United States wins in a bare breasts/bush/butt landslide! “When it comes to nudity, you can say it loud and say it proud because We’re Number One!”
.
Find the whole list at MrSkin.com/celebrity-nudity-hollywood-vs-the-world—27740.
.
Want to see more? To unlock Mr. Skin’s entire collection of more than 20,000 stars, over 200,000 pics & clips and 30,000 films and TV shows in full HD video. New members can find incredible End-of-Summer deals by joining now.
.
Follow Mr. Skin on Twitter @mrskinceleb, Instagram @mrskincelebs and Facebook @mrskincelebs.
.
ABOUT MR. SKIN:
MrSkin.com is the world’s foremost authority on celebrity nudity, and MrSkin.com is the web’s #1 go-to destination for the complete skinny on Hollywood starlets at their hottest. Founded in 1999 by movie buff Jim McBride, MrSkin.com has grown exponentially, now attracting more than 10 million unique visitors every month who come to experience the site’s cast library of sexy celebrity content – including more than 20,000 actress bios, 30,000 movie and TV show reviews and over 200,000 pictures and videos.