Only Make-Believe: Girlsway Suits Up for Three New Episodes of All-Star Series Roleplay with Me 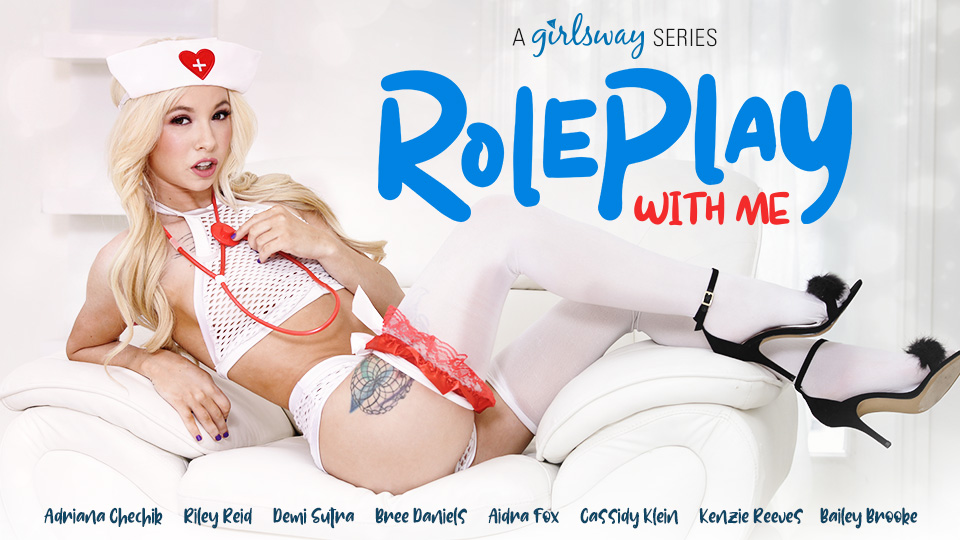 .
Top lesbian studio Girlsway is indulging fans’ favorite fantasies with three new episodes of the all-star series Roleplay with Me, directed by Casey Calvert and Eli Cross – now available at Girlsway.com.
.
The first episode, ‘Bogus Burglar’, stars Riley Reid as a faux house invader who trips during a ‘breaking & entering’ attempt and ruins the roleplay fantasy for her girlfriend (Adriana Chechik). “I was here to rob you,” says Riley, unconvincingly. “You were,” says Adriana, “and you’re doing a really bad job at it!”
.
Episode Two, ‘Scout’s On-Her’, stars Bree Daniels as a ‘bored housewife’ waiting to answer the door to the ‘Scout’ selling ‘cookies’. When her girlfriend Demi Sutra shows up at the door in the humiliating roleplay costume, she can’t stay in character: “This is not me, the outfit’s stupid… this is over the top.” No matter – Bree is only after Demi’s cookies!
.
In the third episode, ‘Faux Photoshoot’, Aidra Fox pays a visit to ‘glamour photographer’ Cassidy Klein for a sexy photo shoot with her ‘husband’. When Aidra shows up alone, Cassidy gets her on the bed and the clothes come flying off! “Don’t be shy,” Aidra teases, “this is for your hubby!”
.
“We had a great time doing the Roleplay with Me scenes this month – the whole theme is a blast, it let us push the envelope in a fun and sexy way into some deceptively twisted territory,” said Calvert of the series.
.
“It also gave the performers a chance to play with their characters in a unique, exciting way. I think roleplay is a great way couples at home can explore with each other, and it was great to bring that to Girlsway.”
.
Find the full series of Roleplay with Me – including first three episodes ‘Special Delivery’ (with Riley Reid & Ivy Wolfe), ‘My Hero’ (with Angela White & Whitney Wright) and ‘School Girl Fantasies’ (with India Summer, Emily Willis & Dava Foxx) – atGirlsway.com and also the dedicated channel on the Adult Time platform at Adulttime.com/channel/Girlsway.
.
Visit Adulttime.com to access its full library of award-winning brands, including Girlsway, and 60,000+ scenes. Follow@Adulttimecom on Twitter for more info and production news.
.
Follow Girlsway and Bree Mills at:
Twitter.com/girlswaynetwork
Twitter.com/TheBreeMills
Instagram.com/girlswaynetworkcom
.
ABOUT GIRLSWAY:
Launched in October of 2014, GIRLSWAY is a premier lesbian erotica studio operated by the Gamma Films Group, the production arm of award-winning adult company Gamma Entertainment and available on the Adult Time platform. Head of Production Bree Mills and her talented Girlsway team create original and addictive content that mixes both passionate lesbian sex with interesting characters and inter-connected storylines.
.
Appealing to both men and women, Girlsway has made their presence known both in and out of the industry and has become critically acclaimed for their style of filming, storyline-based content, talented casting, and most of all, their engagement with their members. With their unique vision and breakthrough content, Girlsway is becoming porn’s most dominant lesbian network.
.
Video-on-demand viewing is also available at Gamelink, HotMovies, AEBN, and AdultEmpire. DVDs are exclusively distributed by Girlfriends Films to all major online retailers and adult stores.
.