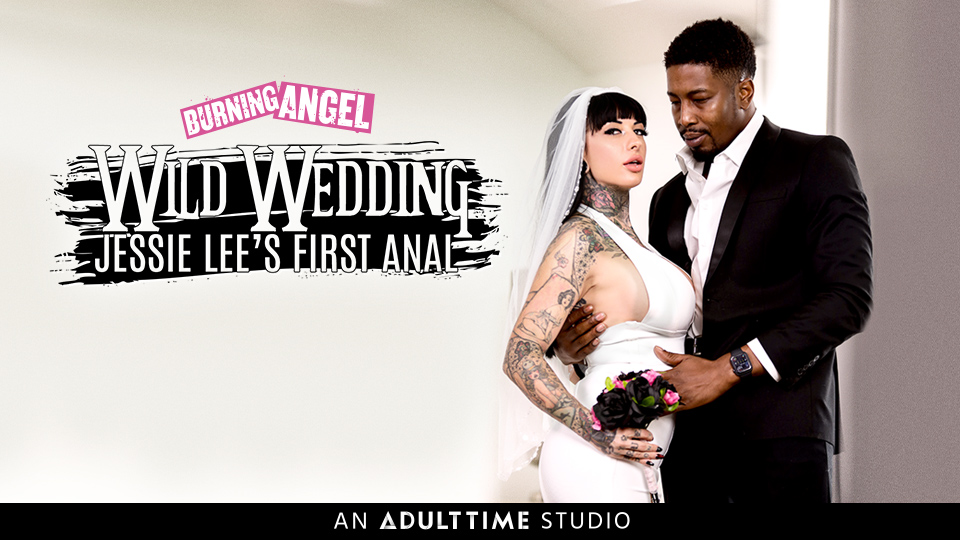 Director Joanna Angel sets the stage for Lee, who plays a beautiful bride set to marry the love of her life (Samantha Mack), but before the ladies make their way to the ceremony, Lee wants to do ONE THING first… a man. Good thing Isiah Maxwell is up to the task!
.
“While there have been many drastic changing variables in the past 10+ years of my life, Jessie Lee, being a close friend and an integral part of BurningAngel has always remained constant. There truly would be no BurningAngel without Jessie Lee,” said Angel.
.
“We had talked about doing her first anal several times, and I could never quite come up with how to properly do it justice. And well, as I stood there at the altar in Las Vegas, dressed in full latex in the 102 degree heat, officiating Jessie Lee and Samantha Mack’s wedding, this series completely just wrote itself as soon as Samantha said ‘I do’. Quite frankly, I think it’s perfect.”
.
Burning Angel is accessible to all members of Gamma Films studios’ sites, as well as on the Adult Time platform at Adulttime.com, home to the most extensive catalog of award-winning content with access to more than 260 channels, 55,000 scenes and 8 new releases per day – all in one subscription.
.
About Burning Angel:
Co-founded in 2002 by the award-winning Joanna Angel, Burning Angel is one of the most recognized studios in adult, offering a refreshing mix of sex, rock n’ roll, and pop culture.  Since its launch, Burning Angel has grown from a fierce indie company to a world renowned brand and now features over 1500 episodes as part of the Adult Time platform.
.
About Adult Time:
Launched in 2018, Adult Time is a streaming service exclusively for adults.  Created by award-winning filmmaker Bree Mills, who also serves as Chief Creative Officer, Adult Time is a platform built by fans who believe in a future where mature audiences can safely, securely, and proudly have a place in their lineup for premium adult content.
.
Dubbed the ‘Netflix of Porn’ by mainstream media outlets, Adult Time offers an extensive catalog of over 260 channels, 55,000 episodes and 8 new releases per day from some of the most recognized studios, including Girlsway, Pure Taboo, Burning Angel, Fantasy Massage, 21 Sextury and Vivid Entertainment alongside exclusive original series, feature films and much more.
.
For more information, please visit:
http://www.burningangel.com
http://www.adulttime.com
Follow on Twitter & Instagram:
@burningangel
@adulttimecom
@joannaangel
@thebreemills