Adult Time’s top lesbian studio and specialty channel Girlsway is marking five years of extraordinary erotic filmmaking and celebrating its creative achievements.
.
As a special treat to fans, Girlsway is releasing a very special scene December 27th , ‘Interrupted Anniversary’, about two young lovers (Alina Lopez and Shyla Jennings) enjoying a momentous milestone together while a parade of friends – April O’Neil, Cadence Lux, Abigail Mac and Casey Calvert- drop in to commemorate their special day.
.
“With Girlsway, our vision has always been to treat the lesbian genre with the respect it deserves – by focusing on our creativity, production values, sense of humor, and working alongside some of the most talented women in our industry,” said Bree Mills, who serves as Adult Time’s Chief Creative Officer.
.
Since its initial success with two back-to-back blockbusters, A Wife’s Affair and The Business of Women and a popular Girl of the Month campaign, Girlsway has continued to build its prestigious brand alongside its brightest stars in a remarkably short period of time. 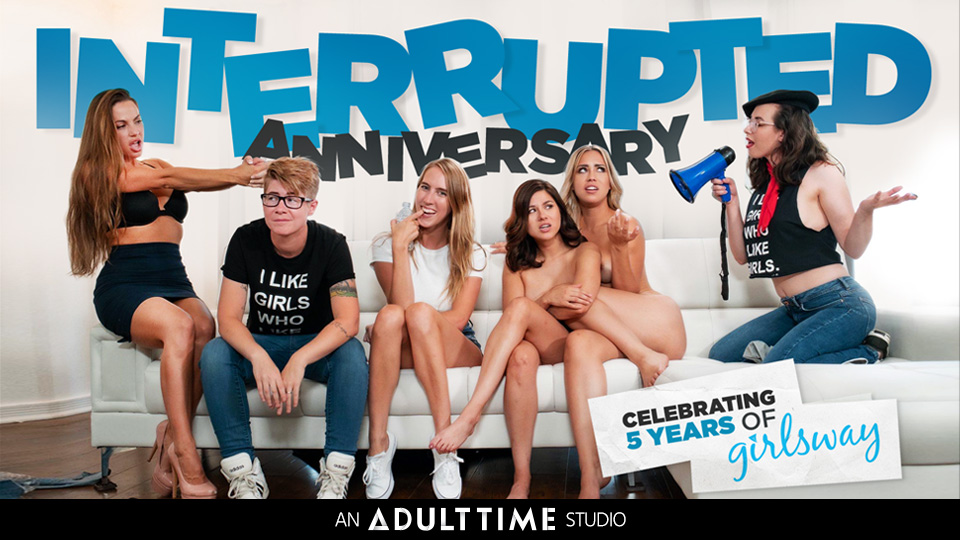 .
Together with subsidiary studios Web Young, Mommy’s Girl, Girls Try Anal and Moms on Moms, Girlsway has grown into a powerhouse production house with the incredible support of popular streaming giant Adult Time.
.
“Now, as part of Adult Time, we have some really exciting lesbian series on the horizon,” said Mills. “My thanks and gratitude to everyone behind the scenes who have helped us build this amazing brand!”
.
About Girlsway:
Launched in October 2014, GIRLSWAY is the largest lesbian erotica studio in adult, now including over 45 lesbian films and series and 7600+ episodes available on the Adult Time platform.  Created by award-winning filmmaker Bree Mills, Girlsway produces original and addictive narrative content that mixes passionate lesbian sex with compelling characters and inter-connected storylines.
.
About Adult Time:
Launched in 2018, Adult Time is a streaming service exclusively for adults.  Created by award-winning filmmaker Bree Mills, who also serves as Chief Creative Officer, Adult Time is a platform built by fans who believe in a future where mature audiences can safely, securely, and proudly have a place in their lineup for premium adult content.
.
Dubbed the ‘Netflix of Porn’ by mainstream media outlets, Adult Time offers an extensive catalog of over 180 channels, 60,000 episodes and 5+ new releases per day from some of the most recognized studios, including Girlsway, Pure Taboo, Burning Angel, Fantasy Massage, 21 Sextury, and Vivid Entertainment, alongside exclusive original series, feature films, and much more.
.
For more information, please visit:
http://www.girlsway.com
http://www.adulttime.com
Follow on Twitter & Instagram:
@girlswaynetwork
@adulttimecom
@thebreemills