The Devil Inside: Burning Angel Dives Deep into Seduction with Succubus May 31, 2021

The Devil Inside: Burning Angel Dives Deep into Seduction with Succubus.

(Montreal, QC / May 31, 2021) — Burning Angel proudly presents Succubus, an eerie new four-part series from director Joanna Angel that foretells a dangerous passage into a seductive underworld with no way back.
.
Kicking off with Part One, landing May 31st on the AdultTime.com network, Angel’s story unfolds with Michael (Small Hands) and his pregnant girlfriend Mary (Jane Wilde), who arrive in a mysterious town to get married and start a new life. When Mary urges Michael to enjoy a solo bachelor party at the local strip club, Michael gets more than he bargained for when he meets dancer Aubrey Kate. 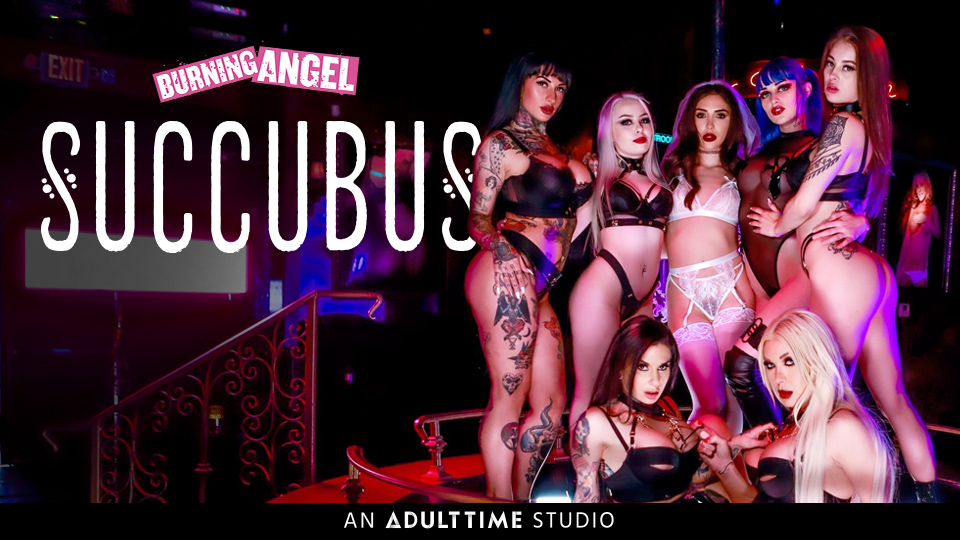 “I’m SO excited for the release of this movie,” says Angel. “I couldn’t be happier with the final product. It’s completely on brand for BurningAngel- it’s incredibly sexy and incredibly spooky! Thank you – to my amazing cast -Aubrey Kate, Jane Wilde, Tommy Pistol and Small Hands – everyone did fantastic. Thank you Mike Quasar for capturing this so beautifully, and thank you Shawn Alff, my award winning writing partner, for collaborating with me on this incredibly dark, but campy and complicated script.”
.
Part Two (out June 13) teases a threesome with dancer Angel and two men (Mick Blue and Zac Wild) onstage, as Mary searches the club for her missing fiancé. Part Three (June 28) offers a soulful encounter with Mary and the church pastor (Tommy Pistol), while Part Four (July 11) concludes with Mary’s discovery of Michael which leads to an explosive three-way with Aubrey in the back of the club.
.
Aubrey Kate is thrilled with the movie as well! “I love this movie. The most amazing film I’ve done to date. And getting to get my hands on both Jane AND Small Hands – that was a dream come true. By far the hottest threesome I’ve ever done. I LOVED being a soul sucking stripper- what a fun concept. Thank you so much Joanna for continuing to cast me in incredible roles! I love being on your sets.”
.
Jane Wilde talks about the challenges she took on in being a part of this film. “This role was so challenging, but so fun! It was such an honor to be back in an iconic BurningAngel thriller – last time I was in a more campy role being a cheerleader in “Three Cheers for Satan” – and this time, I got to really tap into my dark side, being an abandoned bride in a town full of a possessed gang. I am also so proud of my sex scene with not one but two performers of the year – Aubrey Kate and Small Hands. Such a dream come true! I can’t wait for this release – my fans will see me in so many ways they’ve never seen me before!”
.
Get lured into the world of Succubus at BurningAngel.com and AdultTime.com, home to the most extensive catalog of award-winning content of more than 290 channels, 56,000 episodes and 8+ new releases per day – all in one subscription.
.
About Burning Angel:
Co-founded in 2002 by the award-winning Joanna Angel, Burning Angel is one of the most recognized studios in adult, offering a refreshing mix of sex, rock n’ roll, and pop culture.  Since its launch, Burning Angel has grown from a fierce indie company to a world-renowned brand that now features over 1500 episodes as part of the Adult Time platform.
.
About Adult Time:
Launched in 2018, Adult Time is a streaming service exclusively for adults.  Created by award-winning filmmaker Bree Mills, who also serves as Chief Creative Officer, Adult Time is a platform built by fans who believe in a future where mature audiences can safely, securely, and proudly have a place in their lineup for premium adult content.
.
Dubbed the ‘Netflix of Porn’ by mainstream media outlets, Adult Time offers an extensive catalog of over 180 channels, 60,000 episodes and 5+ new releases per day from some of the most recognized studios, including Girlsway, Pure Taboo, Burning Angel, Fantasy Massage, 21 Sextury, and Vivid Entertainment, alongside exclusive original series, feature films, and much more.
.
For more information, please visit:
http://www.burningangel.com
http://www.adulttime.com
.
Follow on Twitter & Instagram:
@burningangel
@adulttimecom
@joannaangel
@thebreemills
.
Looking for the ORIGINAL Succubus movie with Raven Riley and Liz Vicious shot by Wasteland.com?