Adult Time presents a deliciously sinful new series from Burning Angel, Evil Tiki Babes¸ kicking off March 3rd at BurningAngel.com and AdultTime.com.
.
Director Joanna Angel stars in the shady three-part series, set in the super-secret Cannibal Cult Tiki Bar, where doing dirty business is the order of the day!
.
“I’m really excited about this new release! Shawn Alff and I teamed up and wrote this hilarious Tiki thriller, and I couldn’t be more proud,” said Angel. “It’s a great way to start off 2020 at Burning Angel; we have so many more exciting releases in the works, and I am excited to continue keeping porn as weird as I possibly can.” 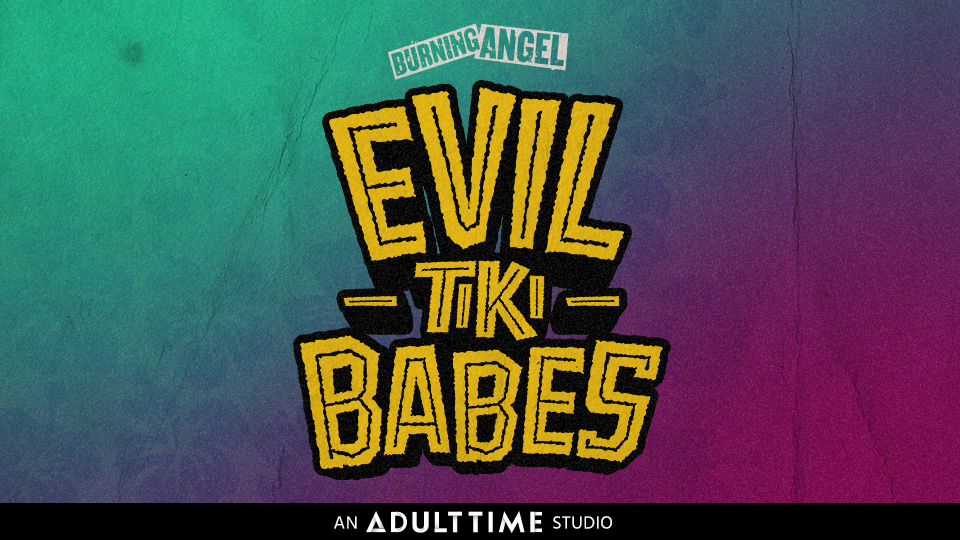 Episode 1 opens with Angel alerting her employees (Jewelz Blu, Vanessa Sky, Ramon Nomar) that her bar – a front for illegal dealings – may be under surveillance. When two hipsters (Emma Hix, Small Hands) show up, Angel is suspicious but Blu and Nomar dazzle their guests with a fiery live show to distract them.
.
In Episode 2 (out March 17), Angel confronts her guests and demands to know the truth of their visit. Small Hands insists they’re not undercover officers and they’re just at the Cannibal Cult Tiki Bar to drink! Angel maneuvers Small Hands into a three-way with Sky to prove his innocence.
.
Episode 3 (out March 31) concludes with Angel’s worst fears revealed, resulting in an explosive confrontation at the bar between Hix and Small Hands that ends with a BANG!
.
Of Blu’s fire-spinning performance, she said, “When I say Evil Tiki Babes is fire, I literally mean it. I am so excited I got to show off my fire dancing skills in this release. I really loved my role in it- funny, and dangerous. I also absolutely LOVED working with Ramon Nomar. I can’t wait for everyone to see this.”
.
Angel added that “Emma Hix truly shined in her role as the innocent and oblivious blogger alongside Small Hands, and Jewelz Blu was – literally – on fire, and Vanessa Sky had the perfect comedic timing in playing my assistant.
.
“Ramon Nomar bartending in his leopard thong was hilarious and arousing, and non-sex role Shawn Alff who spoke in grunts and groans in between gnawing on a giant bone was the perfect touch to tie the movie all together. I am incredibly proud of the set design, the wardrobe, the overall look and feel of this fun release… with amazing sex scenes to boot.”
Burning Angel is accessible to all members of Gamma Films studios’ sites, as well as on the Adult Time platform at Adulttime.com, home to the most extensive catalog of award-winning content with access to over 200 channels, 60,000 scenes and 5+ new releases per day – all in one subscription.
.
About Burning Angel:
Co-founded in 2002 by the award-winning Joanna Angel, Burning Angel is one of the most recognized studios in adult, offering a refreshing mix of sex, rock n’ roll, and pop culture.  Since its launch, Burning Angel has grown from a fierce indie company to a world renowned brand and now features over 1500 episodes as part of the Adult Time platform.
.
About Adult Time:
Launched in 2018, Adult Time is a streaming service exclusively for adults.  Created by award-winning filmmaker Bree Mills, who also serves as Chief Creative Officer, Adult Time is a platform built by fans who believe in a future where mature audiences can safely, securely, and proudly have a place in their lineup for premium adult content.
Dubbed the ‘Netflix of Porn’ by mainstream media outlets, Adult Time offers an extensive catalog of over 180 channels, 60,000 episodes and 5+ new releases per day from some of the most recognized studios, including Girlsway, Pure Taboo, Burning Angel, Fantasy Massage, 21 Sextury, and Vivid Entertainment, alongside exclusive original series, feature films, and much more.
.
For more information, please visit:
http://www.burningangel.com
http://www.adulttime.com
Follow on Twitter & Instagram:
@burningangel
@adulttimecom
@joannaangel
@thebreemills