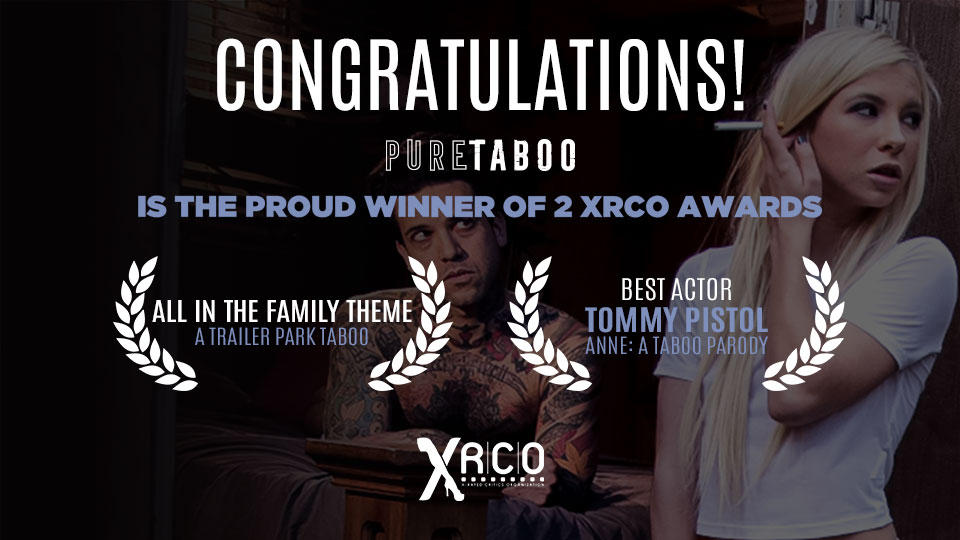 .
The ‘forbidden’-themed erotica series won the All in the Family Theme Award for its darkly provocative Pure Taboo Original Feature A Trailer Park Taboo, while Tommy Pistol earned the Best Actor trophy for his astonishing performance in Anne: A Taboo Parody.
.
Bree Mills, Adult Time’s Chief Creative Officer, said that “we are so proud of the Pure Taboo team for making such ambitious, interesting adult content, and we want to thank the industry folks that make up the XRCO voters who have supported us and our work these past few years.”
.
Pistol was equally excited about his win: “Thank you so much XRCO for granting me the Best Actor award… like I’ve said many times, I honestly do love this job and I only strive to do my best. I will always be humble for the opportunities and work I receive.
.
“Thanks to Adult Time, Bree Mills, Craven Moorehead and all cast and crew that work so well together… our professionalism shows in what we do. I’m proud to be a part of it with all of you.”
.
Mills offered her congratulations “to the supremely talented Best Actor winner Tommy Pistol for playing Anne’s cruel antagonist Mr. Hands so convincingly… maybe too convincingly!” she joked, adding that “Pure Taboo is special in that it pushes boundaries, offers compelling and complex storylines and gives performers the opportunity to express themselves as actors.”
.
Pure Taboo (PureTaboo.com) is accessible to all members of Gamma Films studios’ sites, as well as those on the Adult Time platform atAdultTime.com/puretaboo. Visit AdultTime.com to access the network’s entire catalog of award-winning content – over 60,000 scenes within the Gamma Films studio network.
.
Follow @Adulttimecom on Twitter & Instagram for more info and production news.
.
Puretaboo.com
Twitter.com/puretaboocom
Instagram.com/puretaboocom
Twitter.com/TheBreeMills
.