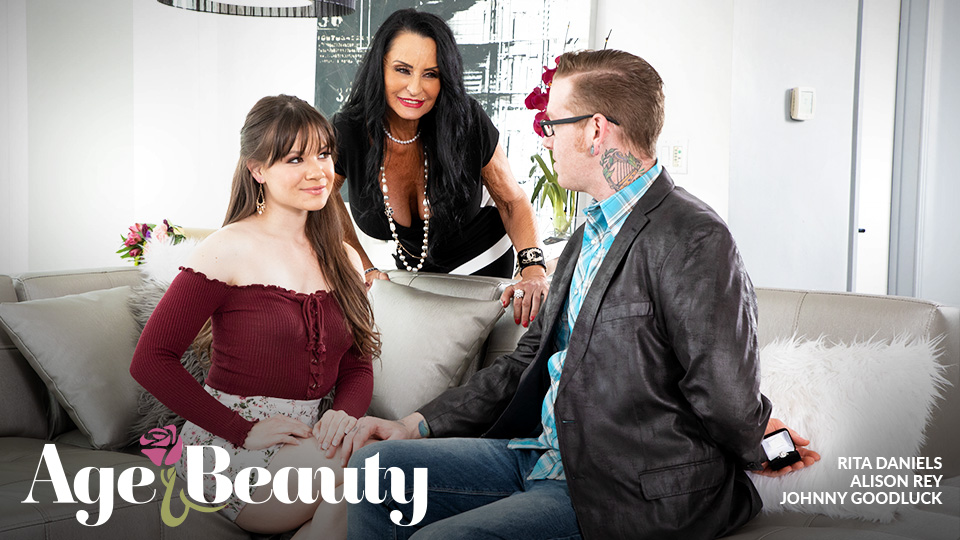 .
The new episode, out today on www.adulttime.com, brings Alison and Johnny over to Grandma’s house for a special visit. Alison wants Rita’s special seal of approval, and Rita is more than happy to get to know her granddaughter’s new guy much, MUCH better.
.
“I’m surprised – you are way too young-looking to be a grandmother,” compliments Johnny, but he’s already won Rita over from the get-go. “I have to get to know all of you, Johnny, before I can give you my blessing,” says Rita as she moves closer to the unsuspecting young man and starts kissing him. Alison walks out to see them, unsurprised. “AGAIN, Grandma???”
.
“The amount of positive feedback we’ve received since the launch of Age & Beauty five months ago has been so tremendous and rewarding,” said director Craven Moorehead of the premium series that shines a well-deserved spotlight on mature women in erotica.
.
“Alluring women don’t suddenly lose their allure over the passage of time – they are ageless, and we’ve proven that yet again with this incredible series.”
.
Daniels, a perfect fit in the role as a flirtatious femme fatale, said that “when it comes to mature women, Age & Beauty is sensational. Watch as a grandmother welcomes her step- granddaughter’s fiancé into her web of sensuality as she gives her blessings.”
.
Shot in eye-popping 4K Ultra HD, the premium series kicked off in December with ‘The Reunion’, starring Nina Hartley, ‘Extra Care’ with Erica Lauren, ‘Company Loyalty’ with Darla Crane, ‘Coffee Date’ with Syren De Mer, ‘Her Tender Touch’ with Sally D’Angelo and, coming soon in June, ‘Our Family Tradition’ with Nina Hartley, Dee Williams and Scarlett Sage.
.
Age & Beauty (ageandbeauty.com) is accessible to all Gamma Films members’ sites, as well as the Adult Time platform at Adulttime.com. Those interested in sneaking a peek or purchasing the series can sign up and subscribe to Adult Time’s entire catalog of content, which gives members access to over 60,000 scenes within the Gamma Films studio network.
.
Follow @Adulttimecom and @ageandbeautyx on Twitter for more info and production news.