Adult Time brings home another exciting episode of Pure Taboo’s Female Submission fetish series, ‘The Kindness of Strangers’, a story of long-held secrets that come to light behind closed doors, out now at Puretaboo.com/The-Kindness-Of-Strangers. 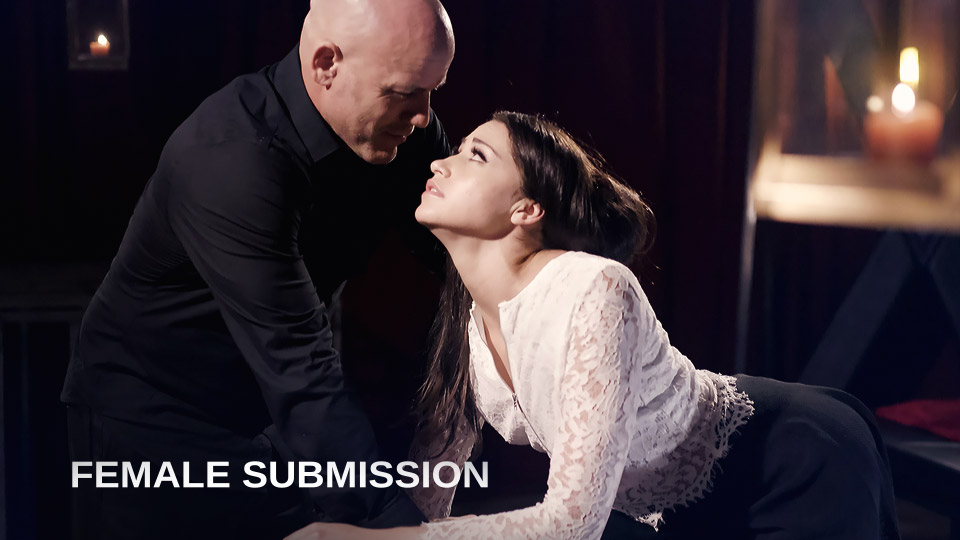 .
Avi Love plays Billie, a homeless teen who snags the opportunity of a lifetime: an invitation to a fundraiser hosted by a wealthy philanthropist named Tom (Derrick Pierce) at his stately mansion. The beautiful young woman quickly catches his eye and Tom casually suggests that Billie stay in one of his guest rooms.
.
“I’d like to offer my home to you – I’d like you to come and live here with me, ” says the handsome millionaire to his awestruck new friend. Once in the house, Tom has one request: “I’m having some renovations done on the east sitting room, which is right down the hall from your room… so it’s really important that you don’t go in there.”
.
As she later passes the room, Billie can’t help but curiously stare at the forbidden door: “Just don’t do it…” But she can’t help herself and cracks the opening to find a fully-stocked BDSM dungeon… as well as Tom, who stands in the shadows behind her.
.
“I come home to find you in the one room I specifically told you not to go in… you can’t follow directions? You have some decisions to make – you can stay here and be a part of something like this, or you can take your ass back on the street…”
.
“Avi is wonderful! That innocent face & demonic soul is a crazy combo,” said Pierce of his ‘The Kindness of Strangers’ co-star. “Allowing us as talent to ‘have at it’ makes for an amazing scene!”
.
Director Craven Moorehead added that “this series is more than just exploring people’s fetishes and proclivities – it’s also about diving into the mindset of why people enjoy this, why the fetish lifestyle appeals to many, and how a long-hidden subculture is quickly dropping its social stigma to become part of popular culture. There’s more to it that meets the eye, and we want viewers to see this with Female Submission.”
.
‘The Kindness of Strangers’ is the fifth episode of the Female Submissionseries that launched in December with ‘The Date’ starring Emily Willis, ‘Coming Home’ with Whitney Wright and Casey Calvert, ‘The Secretary’, starring Jill Kassidy and ‘Dad’s Paddle Collection’ with Marley Brinx.
.
Find the full episode and trailer of ‘The Kindness of Strangers’ at Puretaboo.com/The-Kindness-Of-Strangers and also within the dedicated Pure Taboo channel on the Adult Time platform at Adulttime.com/the-kindness-of-strangers.
Adulttime also publishes a library of the best BDSM movies by Wasteland.com
.
Visit Adulttime.com to access its full library of award-winning brands, including Pure Taboo, and 60,000+ scenes. Follow @Adulttimecom on Twitter for more info and production news.
.
Follow Pure Taboo and Bree Mills on social media:
Puretaboo.com
Twitter.com/puretaboocom
Instagram.com/puretaboocom
Twitter.com/TheBreeMills
.
ABOUT PURE TABOO:
Launched in September 2017, PureTaboo is the latest studio operated by the Gamma Films Group, the production arm of adult company Gamma Entertainment. Helmed by XBIZ and AVN award-winning director Bree Mills and promoting the tagline ‘Some taboos are meant to be broken’, PureTaboo features the most popular and up-and-coming faces in adult today, challenging themselves to bring acting and sexual performances in a way viewers have never seen before.
.
Mills and the PureTaboo team are committed to taking taboo porn seriously, with storylines tackling society’s accepted – but most intriguing – sexual circumstances: inappropriate family relations, compulsions, teen virgin, sexual perversions and the hidden corners of the viewer’s psyche.
.
“We hope to leave you equally shocked and aroused,” says Mills. “After all, aren’t some taboos meant to be broken?”