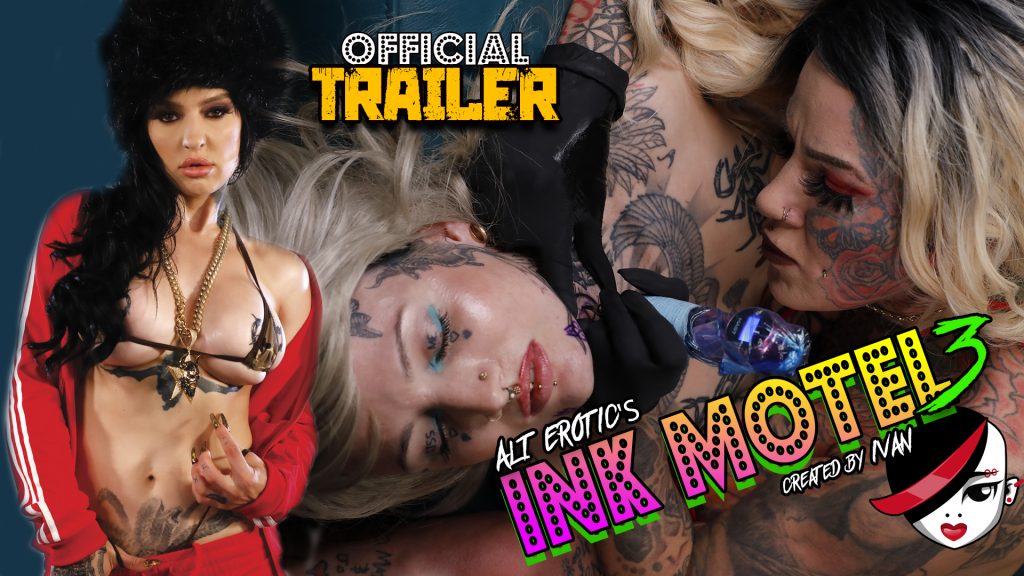 .
Series creator and Director Ivan has been posting exclusive clips and photos from the film to whet fans’ appetite for the third installment of the acclaimed series; both Ink Motel and Ink Motel #2 were nominated for Best Feature at Alt Porn Awards in 2020 and 2021, while Ink Motel #2 earned an AVN Award nomination for Best Comedy Director.
.
“I am so in love with how this project turned out! (Owner) Sascha Ink lets me express my creative energy in every way, and the amazing ladies and gentlemen simply were putty in my director hands,” said Ivan. “This is so wacky, yet erotic in some many ways.  I can’t wait to share this project with everyone and already planning on Part 4 and beyond!”
.
Ink Motel follows a weird group of characters working under the creepy Motel owner Ivan Dragon, who shoots porn and tattoo scenes, often with a hidden camera, “and mostly yells in Russian,” said Ivan. “In this movie we introduce Slutlana Kommunistakova as his arch nemesis from Mother Russia, played by Misha Montana.”
.
Other Ink Motel characters include Evilyn Ink, who starred as Ivan’s love interest in Ink Motel #2. In her scene she tattoos Ivan’s other wrist of a cat paw from his recently deceased cat, referring to their previous scene where she tattooed his first dead cat’s paw. Ink also does a G/G scene with River Dawn Ink (who plays a spice receptionist) during the scene Evilyn fucks River with a strap-on while tattooing River’s neck and jaw.
.
Duke Daybreak is back doing scenes with Samantha Mack (who was in Ink Motel #2), as is Face Tat Mami, who does a tattoo session with 15 face tattoos in one sitting – possibly a world record! “This is Face Tat Mami’s first ever B/G scene, and Duke does a hilarious B/G scene with Misha/Slutlana over a poker game.”
.
The movie concludes with Montana/Slutlana abusing Ivan and tattooing “CYKA” on his finger (meaning ‘Bitch’ in Russian); she quotes a very adult nursery rhyme before performing her first- ever B/B/G scene while getting her knuckles tattooed by Daybreak.  Johnny Goodluck makes an appearance – as ‘Tommy Badluck’ – in the scene.
.
“And if that’s not enough for fans, we also put in a sexy G/G scene between Thumper Suicide and Tigerlilly,” added Ivan. “The entire DVD is over 4 hours long, so you are sure to get your money’s worth at Ink Motel #3!”
.
Want a teaser? Visit Instagram.com/iamslivan to get a taste of Ink Motel #3 before going to Alt Erotic’s YouTube trailer.
.
Visit AltErotic.com and follow on Twitter @alterotic and Instagram @alt.erotic.
.
ABOUT ALT EROTIC:
Launched in 2018, Alt Erotic is the hardcore passion project of German-born Sascha Ink, a 19-year adult industry veteran and Hall of Famer who created the production studio and content site to pursue his love of tattoos, piercings and beautiful women.
.
Sascha began his journey in 2005 when he started the site MyTattooGirls.com, the only site that features real, live tattooing and sex simultaneously. “Having had a lifelong fascination with tattooed and pierced women, I decided that I would create a site that brought the excitement of tattoos, piercings, and sex together”.
.
Along with CEO/Creative Director and award-winning filmmaker Ivan, who came to adult film 20 years ago via Rob Black’s Extreme Associates, Anabolic Digital and his own website network Puba, Alt Erotic aims to offer its viewers a wholly original and intimate experience by uniting the pain and permanence of tattoos and piercings with the pleasure of sex.
.
The site currently boasts an impressive network of sites that cater to alt models, including its podcast KingSlivan.com and YouTube channels Slivan.TV, Tattoo Addition and the soon-to-launch Twisted Crowd. To learn more, visit AltErotic.com.