(Montreal, QC / August 3, 2021) — Pure Taboo is bucking tradition with the release of its latest festive feature, ‘Silk Anniversary’, mixing it up August 3rd at PureTaboo.com and on the AdultTime.com streaming network.
.
After the tantalizing introduction of Mr. & Mrs. Walker (Charles Dera and Natasha Nice) in the just-released (July 27th) ‘Bronze Anniversary’, the secret’s out: after years of bringing home a handsome young man to pleasure Mrs. Walker, Mr. Walker is bringing home someone new and very unexpected… a beautiful young woman, Candy (Kenzie Reeves). 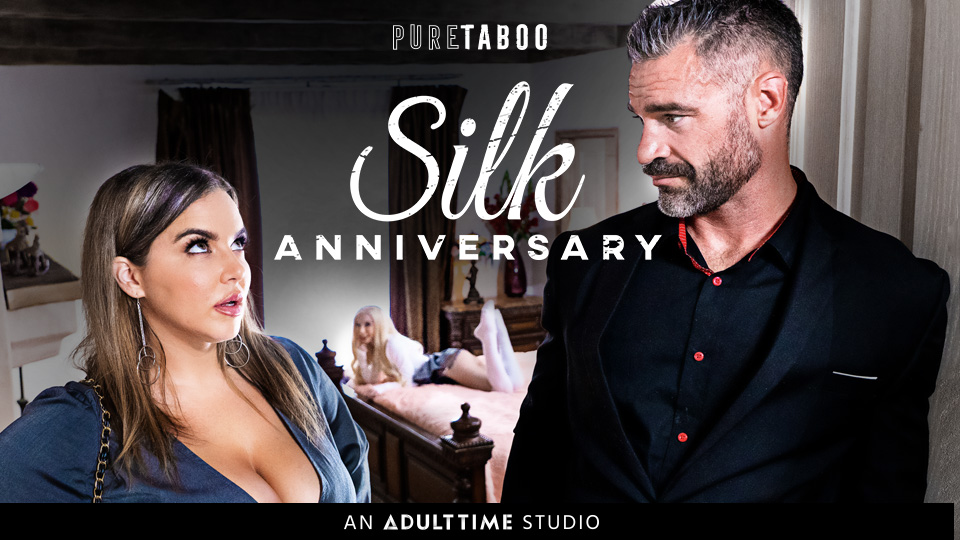 “We recently surveyed our Pure Taboo member base, and the number one thing that they were asking for was more attention to the stories, including multi-part projects, vignette series, sequels to popular episodes, etc.,” said Frank Stacy, Adult Time’s Director of Marketing.
.
With the release of ‘Silk Anniversary’ – a fitting and worthy sequel to ‘Bronze Anniversary’ – we are introducing fans to the first of many projects that will take our concepts beyond a single episode format.”
.
To both commemorate and promote this special ‘Anniversary’, Miss Reeves will host a wild Instagram takeover on Adult Time’s company page (@adulttimecom), kicking off Tuesday, August 2nd at 3PM (PDT)/6PM (EDT).
.
Adult Time members can find ‘Bronze Anniversary’, ‘Silk Anniversary’ and other Pure Taboo titles at both PureTaboo.com and AdultTime.com, as well as access the full library – more than 57,000 premium scenes, 300 channels and 8 new releases per day – of the Adult Time network’s award-winning brands.
.
About Pure Taboo:
Launched in September 2017, Pure Taboo is the leading taboo erotica studio in adult, including over 200 featurette episodes available on the Adult Time platform.  Created by award-winning filmmaker Bree Mills and promoting the tagline ‘some taboos are meant to be broken’, Pure Taboo features the most popular and up-and-coming performers in adult today, challenging themselves to bring acting and sexual performances in a way viewers have never seen before.
.
About Adult Time:
Launched in 2018, Adult Time is a streaming service exclusively for adults.  Created by award-winning filmmaker Bree Mills, who also serves as Chief Creative Officer, Adult Time is a platform built by fans who believe in a future where mature audiences can safely, securely, and proudly have a place in their lineup for `premium adult content..
Dubbed the ‘Netflix of Porn’ by mainstream media outlets, Adult Time offers an extensive catalog of over 270 channels, 55,000 episodes and 8 new releases per day from some of the most recognized studios, including Girlsway, Pure Taboo, Burning Angel, Fantasy Massage, 21 Sextury, and Vivid Entertainment, alongside exclusive original series, feature films, and much more. .
For more information, please visit:
http://www.puretaboo.com
http://www.adulttime.com
Follow on Twitter & Instagram:
@puretaboocom
@adulttimecom
@thebreemills