A version of this feature appears in the July issue of AVN magazine.

“So I did a Christmas scene and it won’t be out for a long time,” Haze jokes. “Yeah it was kind of funny and stuck out to me—in the middle of April to get dressed up in Christmas stuff and there was like a Christmas tree there.

“So that one was fun and I think the anticipation adds to it because now I have to wait all the way to December.”

“Charles was the director and talent,” Haze reveals. “It must’ve been the company requested it or something, I have no idea. I feel like that’s going to be a really fun one and the anticipation is killing me.”

It turns out Haze knew who the versatile Dera was prior to stepping under the mistletoe with him.

“Actually I was kind of a fan of his work. All of his stuff looks really good and I feel like some of our fetishes maybe overlap,” Haze says. “Yeah, I was definitely excited to work with him. He’s definitely impacted the industry.” 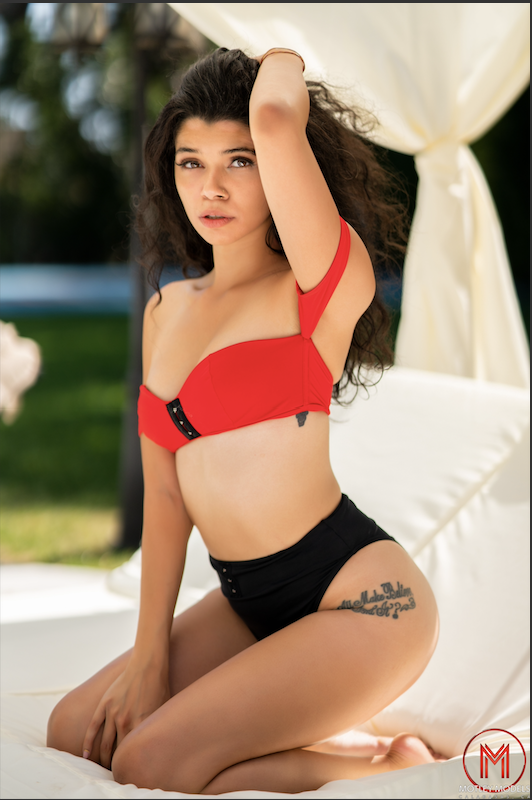 Prior to venturing into adult Haze got her undergraduate degree in psychology with a minor in history from a well-known university in the Lone Star State. Then she started going to law school in England.

“And then just like halfway through my degree I was like, oh, this is a lot of student loans. I don’t know if I can handle this. And I moved back,” Haze explains. “I was a legal assistant for quite a few years and really interested in law and things like that.”

A self-proclaimed “nerd” who loves reading, Haze grew up in a small town north of Austin, Texas. She recalls how the Playboy mystique captured her imagination.

“Definitely growing up I remember seeing Playboy and thinking why do I want to be in Playboy so bad?” Harley says. “You know in the casinos, they have the Playboy bunny girls walking around, and I was like, ‘This is my dream job.’

“And I was just so good at school though that I was just like, ‘Oh, I guess I’ll just keep going to school or whatever.’ It’s always been in the back of my mind a little bit, but I don’t think I really thought I would ever take the jump.”

Going to law school in the U.K. was an impulse decision, she says.

“I had been in Texas all of my life. I was like, ‘What’s the opposite of Texas?’ And I felt like England, they had a really good program… And so I feel a bit like an impulsive person. And if something sounds good and I start planning for it … I kind of just ended up there, not really knowing how I ended up there,” Haze says with a grin.

When she decided to return to the States, she went to Denver for a couple years.

“Just another impulsive decision,” she says, laughing. “I don’t have very good reasons for anything. So I just ended up there for about two years.”

She gravitated toward L.A. in part because the weather is similar to Texas.

“It’s not like Denver, where I have to worry about how to drive in the snow,” Haze adds.

While in Denver, Harley did closed captioning for TV, “processing like the words and making sure they match the people’s voices.”

“So I was working with that in the media entertainment industry,” Harley says. “It’s as boring as it sounds.” 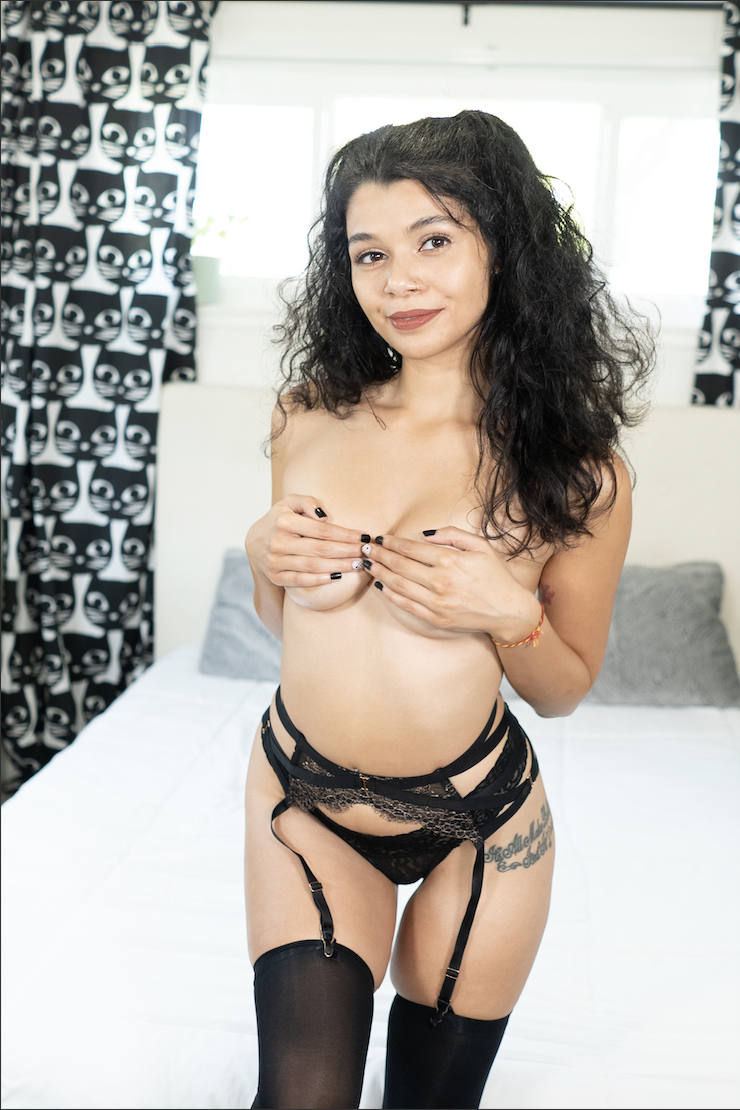 She arrived in L.A. around when the pandemic was in its early stages in February 2020, exploring the live camming scene for about a year. She cammed mainly on Flirt4Free and Streamate.

“And after a year of Covid it was so mundane just staring at a screen. So I thought the adult industry would be a nice change,” Harley says. “I really liked the change into more like mainstream. I mean, even just after Covid being able to go on set and meet people and socialize was just such a blessing.”

She remembers watching the all-digital 2021 AVN Awards Show in January, noticing that Motley Models had a big night as Emily Willis won the Female Performer of the Year crown and Scarlit Scandal claimed the Best New Starlet trophy.

She was intrigued—and started following Motley Models on Twitter.

Not long after, Motley agent Ryan Kona reached out.

“I was actually watching the AVNs and they did so good during awards season, I was like, ‘Who is this Scarlit Scandal girl, who is she signed with?’ I want to be with that group of people.

“I think they just did so good. It was just very impressive to me.”

Haze continues, “It was kind of a combination of Emily Willis got a ton of awards. I mean just a lot of their girls were doing really well. And also the type of work I wanted to do and the kind of companies I want to be working for. So yeah, I followed them on Twitter and me and Ryan got to talking.” 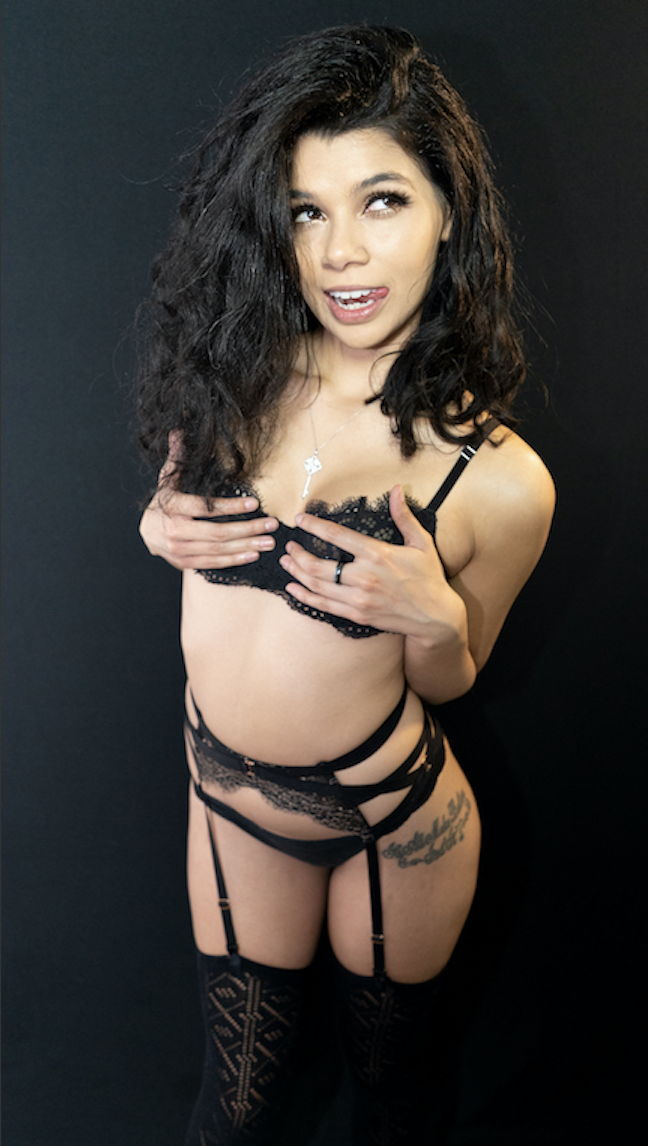 Haze did her first scene as a Motley Model in February for Mile High Media’s Doghouse Digital studio, taking on Jon Rogue for Caught By My Stepsister 2.

“It was your typical stepbrother scene. It was really good and really fun,” Haze says. “I don’t want to say easy, but it felt natural. It wasn’t nearly…I don’t know I was thinking maybe I would have anxiety on the set or be so nervous I can’t do anything, but it was not like that at all.”

She says Rogue could not have been better as her co-star.

“He was so nice to me. He was so sweet and he’s very good at his job,” Harley says.

Now 20-something scenes later, “I still like it,” she adds.

“It’s so fun. Every day is different. I feel excited. It’s still very new to me and fresh so everything is still very exciting.”

“That girl has the most beautiful smile,” says Motley Models president Dave Rock. “She’s got a great attitude and loves her scenes. She’s been a super reliable girl for us.”

“Harley is a great girl, so far I’ve gotten very positive feedback on her,” Kona tells AVN. “People fall in love with her look, her style, her smile. She’s pretty much a complete package when you’re looking for a performer in this industry.

“She’s been working for all the major companies. When you have a smile like hers it’s kind of hard to keep her off sets. She’s been doing very well.” 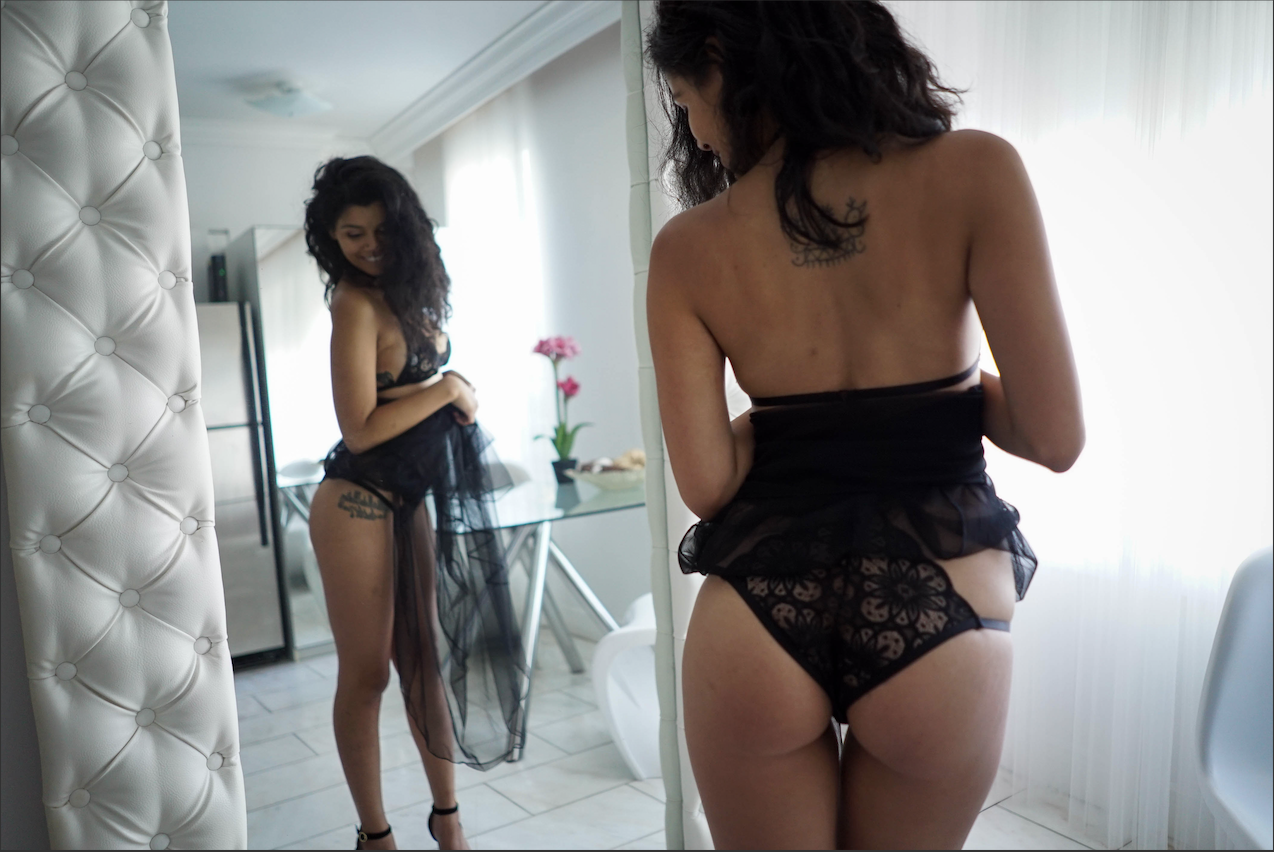 Haze, 28, says her mother is from the island of Trinidad in the Caribbean, located off the northeastern coast of Venezuela.

“She’s a Caribbean person of Indian descent,” Harley says. “And then my dad is just white from Michigan, so I got a very diverse upbringing.”

Harley reads a lot of fiction books in her free time, such as the writing of Kazuo Ishiguro.

She also enjoys being outdoors.

“California is so beautiful. I’ve been hiking a lot,” Harley continues. “Tons of hiking… I love camping, and there’s a lot of camping around here. Especially during Covid I really wasn’t going out. So I’m just now really appreciating all the outdoor activities.”

Haze says she wants to keep getting bookings and improving her performances.

“There’s always companies I want to work for and things like that and hopefully I get to accomplish those,” she says. “But for now, I have to take step by step, like every shoot will be a little better than the last shoot.

“And that’s really my only expectation.”