Girlsway gives into temptation with the release of a brand-new scene from its popular Supernaturally Stacked series, ‘Lezanthropy’, breaking free April 25 at Girlsway.com and on the AdultTime.com streaming platform.
.
Cursed with an overwhelming desire for female flesh during every full moon, horny Lena Paul calls on her friend Karlee Grey to help restrain her from giving into her urges as a “raging, uncontrollable, savage lesbian”.
.
Dan and Rhiannon Anatomik of Anatomik Media, who directed the sizzling Sapphic scene, said, “This was such a fun, inventive script! Karlee and Lena are outstanding performers, and we were lucky to have such a great pairing.”
. 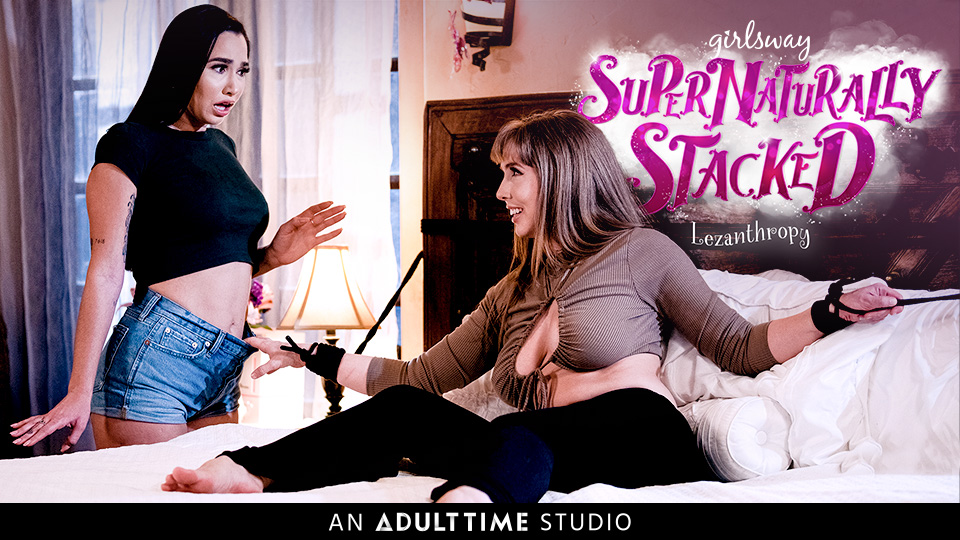 ‘Lezanthropy’ is the fifth episode in the otherworldly series, treating Girlsway fans to the ample assets of the brand’s hottest stars, where “naturally busty ladies explore the realm of the supernatural and their own stacked bodies”.
.
Supernaturally Stacked: ‘Lezanthropy’ is available for download or streaming at Girlsway.com as part of the AdultTime.com network, home to the most extensive catalog of award-winning content – with access to over 270 channels, 55,000 scenes and 8+ new releases per day – all in one subscription.
.
About Girlsway:
Launched in October 2014, GIRLSWAY is the largest lesbian erotica studio in adult, now including over 1,900 lesbian films and series and 8000+ episodes available on the Adult Time platform. Created by award-winning filmmaker Bree Mills, Girlsway produces original and addictive narrative content that mixes passionate lesbian sex with compelling characters and inter-connected storylines.
.
About Adult Time:
Launched in 2018, Adult Time is a streaming service exclusively for adults.  Created by award-winning filmmaker Bree Mills, who also serves as Chief Creative Officer, Adult Time is a platform built by fans who believe in a future where mature audiences can safely, securely, and proudly have a place in their lineup for premium adult content.
.
Dubbed the ‘Netflix of Porn’ by mainstream media outlets, Adult Time offers an extensive catalog of over 280 channels, 56,000 episodes and 8+ new releases per day from some of the most recognized studios, including Girlsway, Pure Taboo, Burning Angel, Fantasy Massage, 21 Sextury, and Vivid Entertainment, alongside exclusive original series, feature films, and much more.
.
For more information, please visit:
http://www.girlsway.com
http://www.adulttime.com
.
Follow on Twitter & Instagram:
@girlswaynetwork
@adulttimecom
@thebreemills