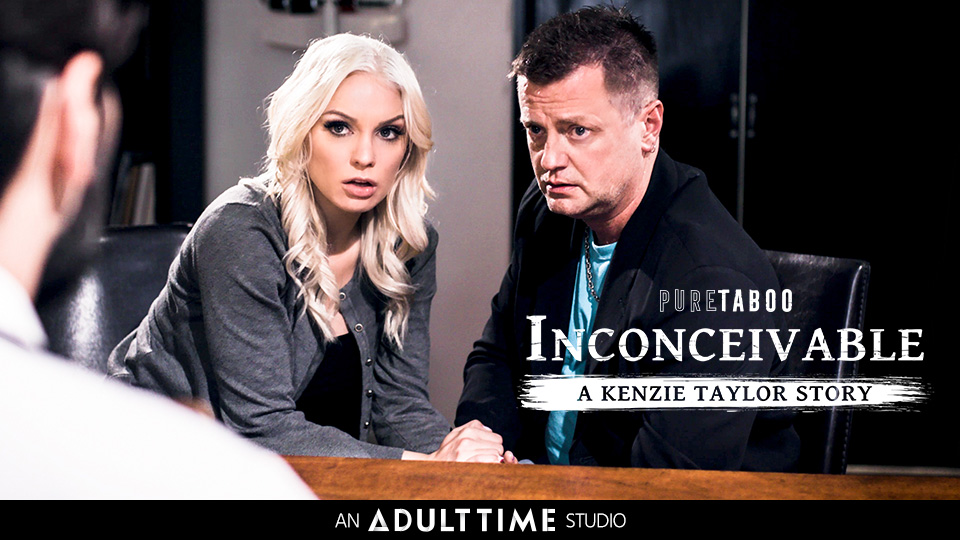 (Montreal, QC / November 14, 2019) — Adult Time mixes deception with conception in Pure Taboo’s Inconceivable: A Kenzie Taylor Story, available online today (November 14) at PureTaboo.com and on the AdultTime.com streaming platform.
.
Taylor came up with the sinister storyline about a shady fertility doctor (Tommy Pistol) who informs couple Olivia and Jacob (Taylor and Eric Masterson) that they cannot conceive children because Jacob is infertile. But hope is not lost, because the good doctor says he is more than happy to personally help them out himself…
.
“Craven Moorehead did an amazing job at capturing exactly what I wanted visually with the story that I wrote,” said Taylor. “I also couldn’t have picked two better co-stars than Tommy Pistol and Eric Masterson.”
.
Moorehead responded with equal praise for Taylor, saying, “Kenzie came up with a great script for this project, and it was a beautifully ‘conceived’ – she was clear about what she wanted and that makes my job so much easier. It’s a great story, and I appreciate her twisted mind!”
.
“I am truly grateful that Adult Time picked my story and allowed me to showcase myself and my story with the utmost level of trust and comfort,” added Taylor. “The rest of the entire crew was amazing throughout the entire process as well, and it was such a joy creating this film. I’m thrilled to see how the audience will receive it.”
.
The trailer and full scene for Inconceivable: A Kenzie Taylor Story are available at PureTaboo.com and the dedicated channel on the Adult Time platform at AdultTime.com, home to the most extensive catalog of award-winning content – with access to over 180 channels and 60,000 episodes in one subscription!
.
About Pure Taboo:
Launched in September 2017, Pure Taboo is the leading taboo erotica studio in adult, including over 200 featurette episodes available on the Adult Time platform.  Created by award-winning filmmaker Bree Mills and promoting the tagline ‘some taboos are meant to be broken’, Pure Taboo features the most popular and up-and-coming performers in adult today, challenging themselves to bring acting and sexual performances in a way viewers have never seen before.
.
About Adult Time:
Launched in 2018, Adult Time is a streaming service exclusively for adults.  Created by award-winning filmmaker Bree Mills, who also serves as Chief Creative Officer, Adult Time is a platform built by fans who believe in a future where mature audiences can safely, securely, and proudly have a place in their lineup for `premium adult content.
.
Dubbed the ‘Netflix of Porn’ by mainstream media outlets, Adult Time offers an extensive catalog of over 180 channels, 60,000 episodes and 5+ new releases per day from some of the most recognized studios, including Girlsway, Pure Taboo, Burning Angel, Fantasy Massage, 21 Sextury, and Vivid Entertainment, alongside exclusive original series, feature films, and much more.
.
For more information, please visit:
http://www.puretaboo.com
http://www.adulttime.com
.
Follow on Twitter & Instagram:
@puretaboocom
@adulttimecom
@thebreemills