Adult Time is raising Lucifer Hell with Burning Angel in October with four episodes of its devilishly sinful feature series ‘Three Cheers for Satan’, starting October 8 at BurningAngel.com and AdultTime.com.
.
Joanna Angel directed each episode, and Adult Time’s Chief Creative Officer Bree Mills said that fans are in for a big treat: “Joanna is the queen of horror comedy and this new feature is perfect evidence of this!”
.
Small Hands is the handsome devil that kicks off the first episode circa 1999 as he tempts three young cheerleaders (Kenzie Reeves, Kira Noir and Jane Wilde) into making a dirty deal that will bring them eternal beauty… but their contract stipulates a virgin sacrifice in 20 years…
Episode Two (September 15) brings Kira Noir and Kenzie Reeves back together for a fun photo shoot with a handsome photographer (Kyle Mason) in 2019 – don’t they look so YOUNG?? But it’s 20 years later and the devil is coming to get his due very soon… where will they find a virgin to sacrifice?
.
In Episode Three (September 22), the race is on to find a virgin, which the devil needs on the eve of the girls’ 20th high school reunion; Kira and Kenzie have found one in nerdy ‘warlock’ Tommy Pistol. Jane really likes Tommy and doesn’t want to see her friend sacrificed, so she decides to save him by taking his virginity first!
.
Episode Four concludes with Satan hosting Tommy’s virgin sacrifice ritual at Kira, Kenzie and Jane’s 20-year reunion, but Jane has foiled their plan and the sacrifice backfires, with Jane morphing into her thirtysomething self (Joanna Angel), and Tommy (now in the form of Alex Legend) stealing Kira and Kenzie’s beauty for himself!
.
“Spooky season has started early, and in yearly tradition we are celebrating on Burning Angel,” said Angel of the series. “I’m incredibly proud of this movie – it’s got laughter, blood, romance and sex- all my passions in life combined!
.
“Kenzie, Kira and Jane were the absolute perfect trio of cheerleaders, Small Hands so naturally played the devil and Tommy was hysterical in his nerdy warlock character. I couldn’t be more proud.”
.
Burning Angel is accessible to all members of Gamma Films studios’ sites, as well as on the Adult Time platform at Adulttime.com, home to the most extensive catalog of award-winning content with access to over 180 channels and 60,000 episodes in one subscription. 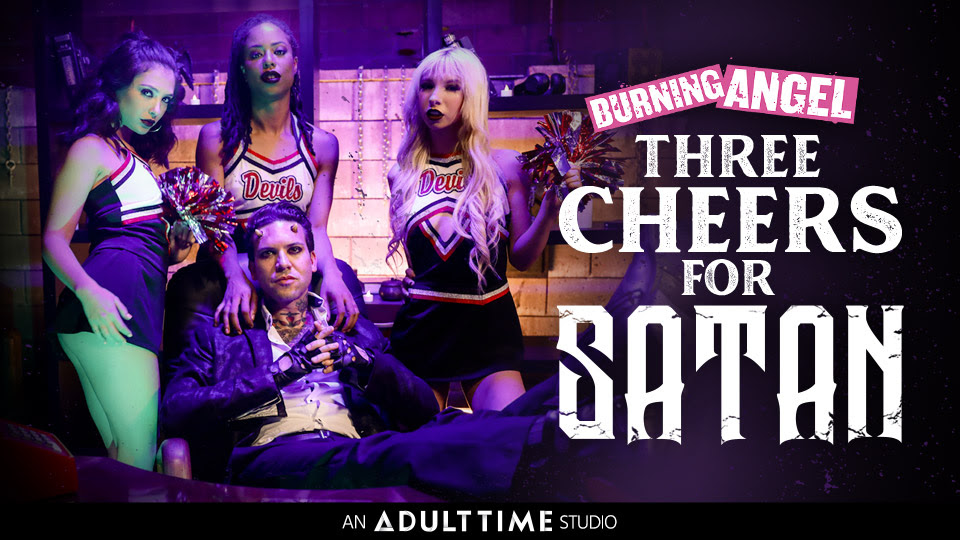 Co-founded in 2002 by the award-winning Joanna Angel, Burning Angel is one of the most recognized studios in adult, offering a refreshing mix of sex, rock n’ roll, and pop culture.  Since its launch, Burning Angel has grown from a fierce indie company to a world renowned brand and now features over 1500 episodes as part of the Adult Time platform.

Launched in 2018, Adult Time is a streaming service exclusively for adults.  Created by award-winning filmmaker Bree Mills, who also serves as Chief Creative Officer, Adult Time is a platform built by fans who believe in a future where mature audiences can safely, securely, and proudly have a place in their lineup for premium adult content.
.
Dubbed the ‘Netflix of Porn’ by mainstream media outlets, Adult Time offers an extensive catalog of over 180 channels, 60,000 episodes and 5+ new releases per day from some of the most recognized studios, including Girlsway, Pure Taboo, Burning Angel, Fantasy Massage, 21 Sextury, and Vivid Entertainment, alongside exclusive original series, feature films, and much more.
.
For more information, please visit:
http://www.burningangel.com
http://www.adulttime.com
.
Follow on Twitter & Instagram:
@burningangel
@adulttimecom
@joannaangel
@thebreemills