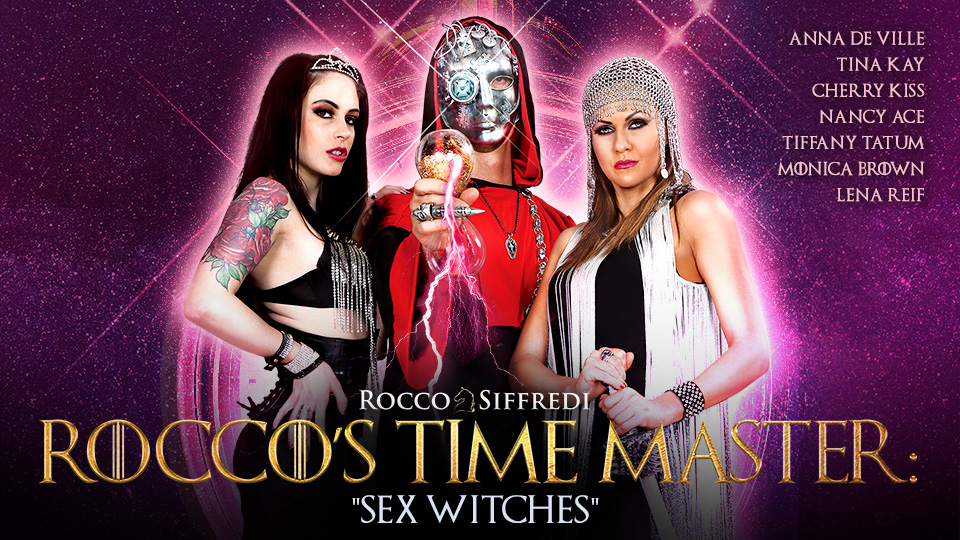 .
Adult Time introduces an epic new fantasy/sci-fi erotic series from Rocco Siffredi, ‘Rocco’s Time Master: Sex Witches’, a thrill-a-minute adventure in four binge-able episodes – available now at roccosiffredi.com & adulttime.com.
.
The hardcore legend stars in and directed – with a script and agile camera work by Siffredi’s cousin Gabriele Galetta – the imaginatively engaging feature of warring wizards, witchcraft and lusty lesbian spells, starring Euro performers Tina Kay, Cherry Kiss, Anna De Ville, Tiffany Tatum, Lena Reif, Monica Brown, Nancy Ace, Kristof Cole and Lutro.
.
“‘Time Master’ is a movie in two parts: ‘Time Master: Sex Witches’ and ‘Time Master: Sex Witches’ Revenge’… with this movie, Gabriele and I wanted to do something completely different,” said Siffredi. “It’s a way to approach sex and porn with more ingredients, like a big story line and some special effects – with our budget, we cannot do incredible special effects, but fun ones.”
.
Siffredi and Galetta “shot around a very old castle with a real tradition of witches. In our tradition, witches are not bad; they were different from ordinary, regular women… I could say they were artists or visionaries.”
.
“’Rocco’s Time Master: Sex Witches’ is one of the most highly-anticipated releases of the year, and his entire catalog of content on the Adult Time platform is consistently among the most popular and most-watched on the site,” said Bree Mills, Adult Time’s Chief Creative Officer.
.
“When it comes to talent in the adult industry, there are stars and there are superstars… and then there’s Rocco Siffredi. He’s an inspirational performer and a groundbreaking filmmaker, and we’re excited to present this amazing feature to fans as a four-episode series.”
.
Shot in crystal-clear 4K Ultra HD, ’Rocco’s Time Master: Sex Witches’ Scene 1 stars Siffredi with Tina Kay & Anna De Ville Scene 2 stars Cherry Kiss, Nancy Ace and Kristof Cale, Scene 3 stars Tiffany Tatum and Lutro, and Scene 4 stars Siffredi with Monica Brown and Lena Reif.
.
“I had fun playing the Time Master (who else?!), who frees their sexuality for a certain time,” added Siffredi. “This is very interesting, and I think it’s really good to connect sex and story. The movie came out great. I hope you will enjoy!”
.
Rocco Siffredi (RoccoSiffredi.com) is accessible to all Gamma Films members’ sites, as well as the Adult Time platform at Adulttime.com/roccostimemastersexwitches. Those interested in sneaking a peek or purchasing the series can sign up and subscribe to Adult Time’s entire catalog of content, which gives members access to over 60,000 scenes within the Gamma Films studio network.
.