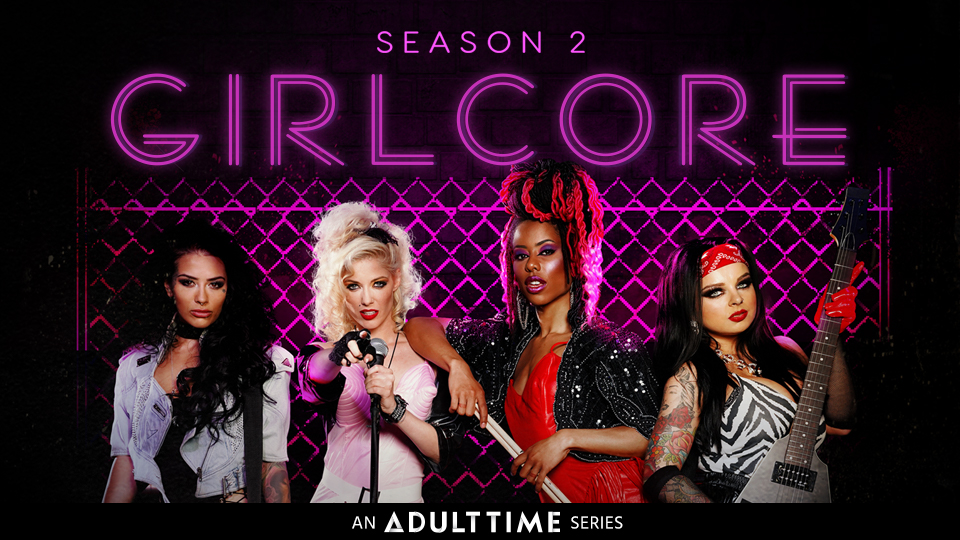 .
The first episode ‘Rock You Like a Hurricane’ (out now) explores the metal years as Charlotte Stokely and Katrina Jade’s band Twisted Fister goes head-to-head with Lena Paul and Karla Kush’s MegaLez in the ultimate Battle of the Bands. Will their fight end in perfect harmony or a symphony of destruction?
.
In Episode Two, everybody’s ‘Working for the Weekend’ (out Dec 12) as two powerful Working Girls (Brandi Love and Reagan Foxx) – each with a mind for a business and a bod for sin – duke it out in the boardroom to determine who will reign supreme.
.
Episode Three, ‘She Blinded Me With Science’ (out Dec 26), gets WEIRD in the lab when Serena Blair and Cadence Lux set out to create the perfect virtual 3D woman (Kenzie Taylor) from bits and pieces, magic, technology and pictures from a magazine. A power surge creates an explosion of epic proportions. Is it real?
.
“These episodes are among my favorites – this series may be one of the best I’ve ever done, seriously! We always have way too much fun when we’re working on Girlcore,” said Mills of the time capsule tribute. “Craven and Whitney did an excellent job with their four episodes, and fans will love reminiscing about an era synonymous with fun.”
.
Moorehead added that “this series highlights what was so special about this decade – some might say the best decade – and we hope that viewers appreciate the details we’ve added to make it one of the best series we’ve done to date.”
.
Fans can find Girlcore Seasons One & Two at Girlcore.com and on the Adulttime.com platform.
.
About Adult Time:
Launched in 2018, Adult Time is a streaming service exclusively for adults.  Created by award-winning filmmaker Bree Mills, who also serves as Chief Creative Officer, Adult Time is a platform built by fans who believe in a future where mature audiences can safely, securely, and proudly have a place in their lineup for premium adult content.
.
Dubbed the ‘Netflix of Porn’ by mainstream media outlets, Adult Time offers an extensive catalog of over 180 channels, 60,000 episodes and 5+ new releases per day from some of the most recognized studios, including Girlsway, Pure Taboo, Burning Angel, Fantasy Massage, 21 Sextury and Vivid Entertainment alongside exclusive original series, feature films and much more.
.
For more information, please visit: http://www.adulttime.com.
Follow on Twitter & Instagram:
@adulttimecom
@thebreemills

Deeper, the specialty erotica production house from adult’s reigning Director of the Year Kayden Kross, welcomes Stoya in her writing and directing debut for the studio, You Know What I Like, available November 15 exclusively at Deeper.com.
.
Starring Alexis Tae and Mickey Mod, You Know What I Like weaves an exquisite web of passionate foreplay, rough sex and profound intimacy that the filmmaker describes as attentive, generous and amorous.
.
“Mickey and Alexis had such fantastic chemistry, every part of the set was professional, and I had a great time on my first foray into fictional narrative pornography,” said Stoya. 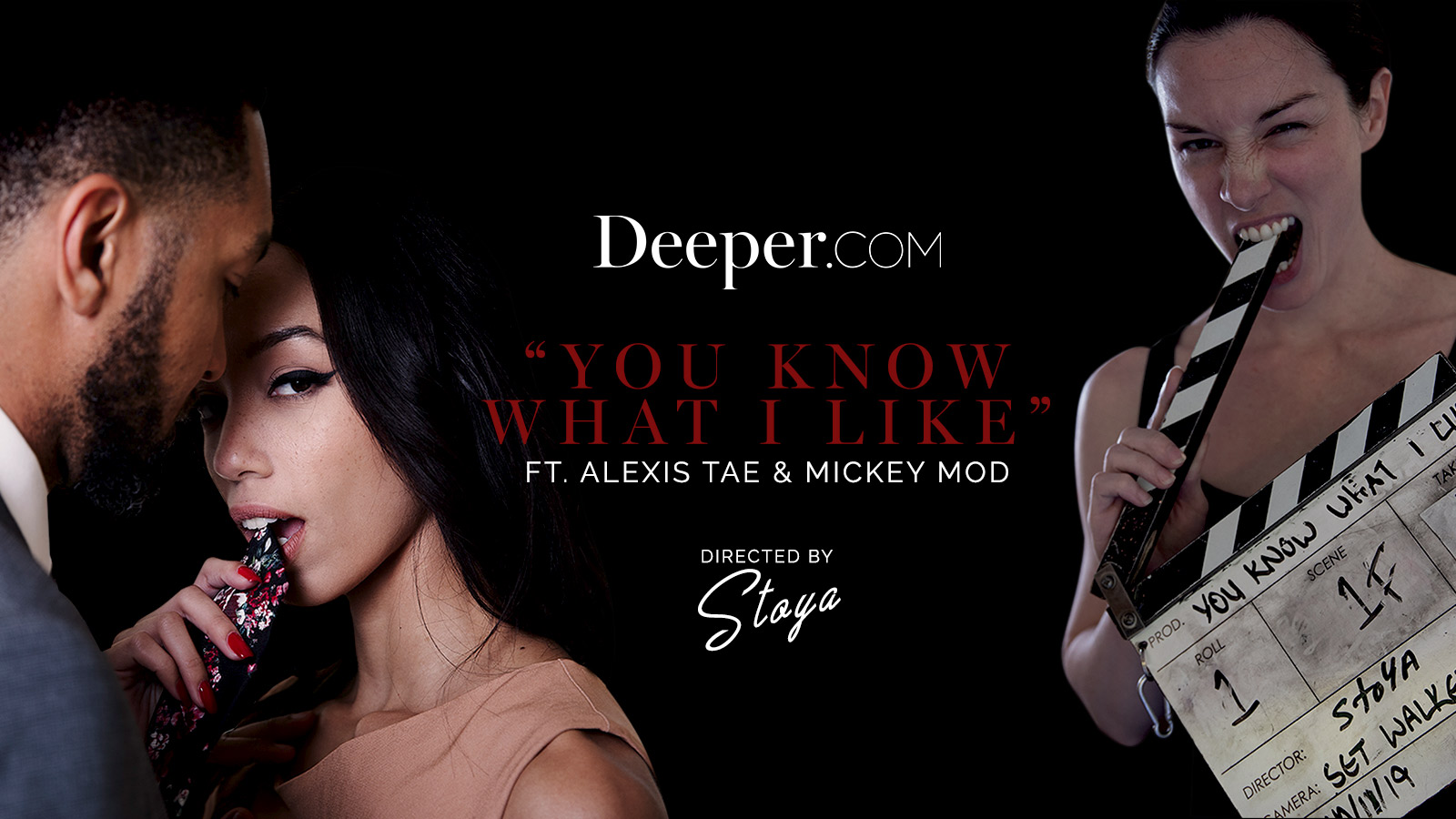 .
“I’m wildly impressed with what Kayden has done with Deeper, and was honored to be asked to direct something for her company. I’m excited to see what Deeper’s audience thinks of my spin on erotic power games.”
.
Kross was excited to reunite with her former TrenchcoatX producing partner, saying, “It’s no secret that I’ve been a fan of Stoya both personally and professionally for a long time, and her work in co-founding TrenchcoatX is what ultimately made my work on Deeper possible.
.
It’s hugely fitting to see her direct under this new brand, and encouraging that we’re able to attract talent like hers. I look forward to seeing more of her work here.”
.
For more information about Kayden Kross and Deeper visit Deeper.com and follow on social at
Twitter.com/deeper_official
Twitter.com/Kayden_kross
Instagram.com/deeper_official
Instagram.com/ClubKayden
.
ABOUT DEEPER:
Deeper.com is a new venture from TRENCHCOATx founder and filmmaker Kayden Kross that launched in April 2019 as part of Greg Lansky’s Vixen Media Group. The new production studio and site will bring a powerful – and empowering – new voice to the erotic landscape.
.
The award-winning director writes, produces, and often performs in the provocative scenes that make Deeper one of the most captivating new studio debuts in years. The membership site offers crystal-clear streaming and downloads up to 4K Ultra HD.
.
Kross looks to engage and challenge her performers – as well as her fans – in finding a more experimental side of fantasy, and hopes viewers enjoy the multifaceted scenarios that take dominance and surrender to a far Deeper level.
.
ABOUT KAYDEN KROSS:
Kayden Kross is a veteran of the adult film industry who has won awards for her work as both a director and performer. A career contract star, Kross was signed to exclusive deals with industry powerhouses Vivid Entertainment, Adam and Eve and Digital Playground before directing and producing on her own alongside her real-life partner and fellow performer Manuel Ferrara.
Writing in her off time, Kross’s work has appeared in The New York Times, Salon.com, and in a monthly advice column for Nylon Magazine. In 2015 she co-founded TRENCHCOATx, which was acquired in 2019 by Greg Lansky’s Vixen Media Group – boldly re-emerging as Deeper, filmmaking with a fiercely fresh take on the erotic complexities of human nature.

Adult Time is raising Lucifer Hell with Burning Angel in October with four episodes of its devilishly sinful feature series ‘Three Cheers for Satan’, starting October 8 at BurningAngel.com and AdultTime.com.
.
Joanna Angel directed each episode, and Adult Time’s Chief Creative Officer Bree Mills said that fans are in for a big treat: “Joanna is the queen of horror comedy and this new feature is perfect evidence of this!”
.
Small Hands is the handsome devil that kicks off the first episode circa 1999 as he tempts three young cheerleaders (Kenzie Reeves, Kira Noir and Jane Wilde) into making a dirty deal that will bring them eternal beauty… but their contract stipulates a virgin sacrifice in 20 years…
Episode Two (September 15) brings Kira Noir and Kenzie Reeves back together for a fun photo shoot with a handsome photographer (Kyle Mason) in 2019 – don’t they look so YOUNG?? But it’s 20 years later and the devil is coming to get his due very soon… where will they find a virgin to sacrifice?
.
In Episode Three (September 22), the race is on to find a virgin, which the devil needs on the eve of the girls’ 20th high school reunion; Kira and Kenzie have found one in nerdy ‘warlock’ Tommy Pistol. Jane really likes Tommy and doesn’t want to see her friend sacrificed, so she decides to save him by taking his virginity first!
.
Episode Four concludes with Satan hosting Tommy’s virgin sacrifice ritual at Kira, Kenzie and Jane’s 20-year reunion, but Jane has foiled their plan and the sacrifice backfires, with Jane morphing into her thirtysomething self (Joanna Angel), and Tommy (now in the form of Alex Legend) stealing Kira and Kenzie’s beauty for himself!
.
“Spooky season has started early, and in yearly tradition we are celebrating on Burning Angel,” said Angel of the series. “I’m incredibly proud of this movie – it’s got laughter, blood, romance and sex- all my passions in life combined!
.
“Kenzie, Kira and Jane were the absolute perfect trio of cheerleaders, Small Hands so naturally played the devil and Tommy was hysterical in his nerdy warlock character. I couldn’t be more proud.”
.
Burning Angel is accessible to all members of Gamma Films studios’ sites, as well as on the Adult Time platform at Adulttime.com, home to the most extensive catalog of award-winning content with access to over 180 channels and 60,000 episodes in one subscription.

END_OF_DOCUMENT_TOKEN_TO_BE_REPLACED

Vendetta has announced that she has officially accepted the position of manager at a new strip club opening in her stomping grounds of western Massachusetts.

The newly rebranded Club Castaway will be changing formats and catching up with the times.

To aid in this the owners have brought on Bella Vendetta, who announced her retirement from dancing last year.

Bella says; “The new version of the club will be unlike anything Western Mass has ever seen!”

The new version of the club includes:

Wed-Sat will have the classic qualities of the Whately Ballerina’s upscale strip club vibe with an emphasis on performances.

The club will also be opened on Sundays for the first time as a sports bar, complete with food trucks outside!

“I want to get rid of the notion of a dive bar and replace it with an image of a special getaway, a destination location.  What we are creating here is so special you won’t be able to find it in other places,” says Bella of the new business venture. “It will be completely different from anything the other clubs in New England have going on”

Bella would know, as she worked as both a feature entertainer and house dancer at clubs all over the US for the past 13 years.

With a stud lesbian from NYC as a feature dancer Papi Dancebeast instagram.com/Papi_Dancebeast

Then on Halloween Night, Oct 31st will be the Grand ReOpening of the club with “Wicked Witches Bad Bitches”  Club Castaway’s Halloween bash featuring witch costume contest for the dancers with prizes sponsored by:

Follow the clubs official social media to see the flyers as soon as they drop!

The club is currently hiring entertainers, cocktail waitresses, and bartenders.

“The Adventures of Bella and Morgan” is a compilation DVD of work with director and performer Bella Vendetta, and burlesque starlet and fetish model Morgan Fey.  Both femme performers hail from New England and have been working together for well over a decade.

“I put this compilation out a few months after ‘The Training of Poe’ but that film has already gained momentum in an unexpected way and I was knee-deep in touring and the film festival circuit so it kind of got buried.  Morgan Fey has a special place in My heart and I love our work together so I’m so glad it can have some new life and get the attention it deserves.” Said Bella about the re-release.

The film is available as a download as well as a physical DVD purchase. DVD purchases come signed and with a limited edition signed glossy print.  DVD extras include still photo gallery.

You can find all of the info available here:  http://troublefilms.com/shop/the-adventures-of-bella-and-morgan-dvd

To check out the photos from the release party for the film hosted at the 5th alarm Gentlemen’s club in Springfield MA check out this link:

“The Adventures of Bella and Morgan” on Trouble Films: http://troublefilms.com/shop/the-adventures-of-bella-and-morgan-dvd 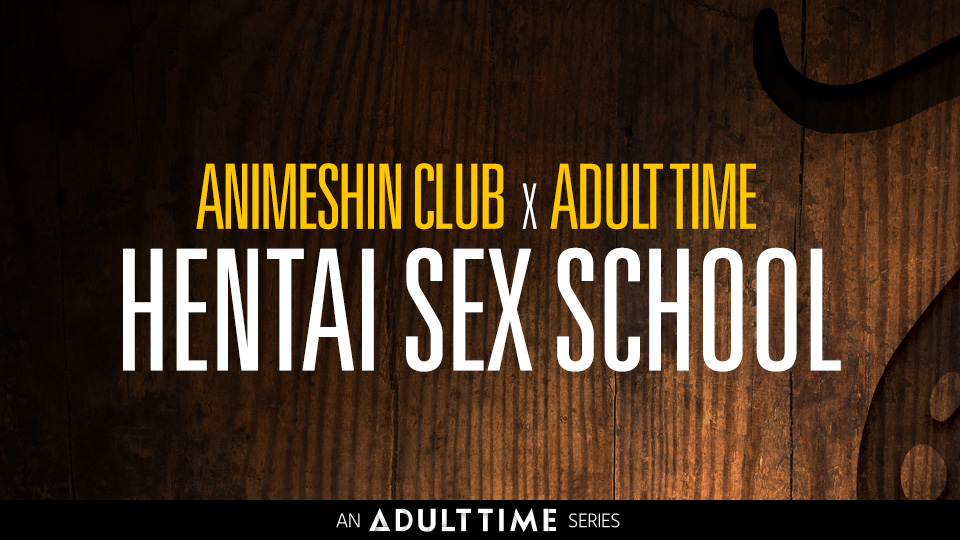